How can I calculate the shortest route between two 2d vector points with obstacles? 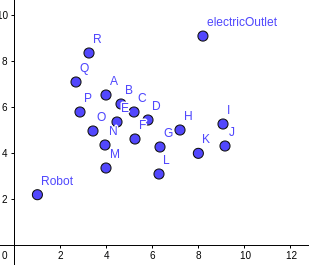 Is there an algorithm to find the shortest path between the Robot and theelectricOutlet?

And if the point has a fixed wingspan? For example, that the space between O and N is smaller than the robot, and then the robot cannot cross?

The usual way to solve this kind of problem is to construct a configuration space: extruding all the polygonal obstacles by sliding the polygon corresponding to the robot around them (some slides).

The exterior vertices of the configuration space can then be used as input to a path-planning algorithm, such as A*.

Not the answer you're looking for? Browse other questions tagged algorithm evolutionary-algorithms robotics pathfinding or ask your own question.