I am struggling to understand the use of the Convolutional Sequence to Sequence (Conv-Seq2Seq) model. The image below is take directly from the paper and is the nearly canonical diagram of the parallel training procedure. After puzzling over it for quite some time, it has come to seem straight forward to me:

This is clearly not the case after the network is trained and evaluation input sequences are translated without reference outputs. I understand from various resources (including but not limited to Gehring's conference presentation) that post-training, output sequences are generated token by token in a fashion vaguely similar to earlier architectures, but I cannot find a clear description of that process.

(I speculate that this is because the parallel training routine was so revolutionary at the time, that the focus of the publications was rightly on the training routines.)

Can someone please help me understand the post-training generation algorithm, if possible in terms of the training diagram?

My current non-confident understanding is that the sentence below would be handled something like the following: 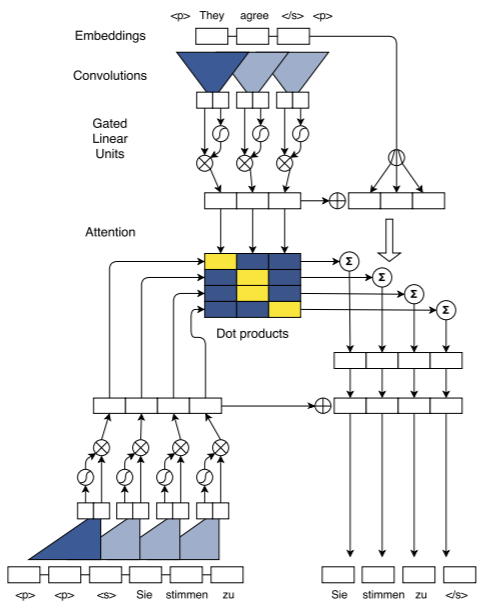 I know it's too late to answer your query after 1.5 years

The inference algorithm is explained at https://charon.me/posts/pytorch/pytorch_seq2seq_5/#inference

Implementation of the algorithm is available at: https://github.com/pytorch/fairseq.

One could get a complete understanding from their source code.

Not the answer you're looking for? Browse other questions tagged convolutional-neural-networks sequence-modelling or ask your own question.

1
Detecting abnormalities in x-rays while taking into account demographics of a patient -automated
1
Convolutional Sequence to Sequence Learning kernel parameters
11
Can the decoder in a transformer model be parallelized like the encoder?
35
Why do CNN's sometimes make highly confident mistakes, and how can one combat this problem?
2
Are there any advantages of the local attention against convolutions?