DQN Agent not learning anymore - what can I do to fix this?

I am trying to use Deep-Q-Learning to learn an ANN which controls a 7-DOF robotic arm. The robotic arm must avoid an obstacle and reach a target.

I have implemented a number of state-of-art techinques to try to improve the ANN performance. Such techniques are: PER, Double DQN, adaptive discount factor, sparse reward. I have also tried Dueling DQN but it performed poorly. I have also tried a number of ANN architectures and it looks like that 2 hidden layers with 128 neurons is the best one so far. My input layer is 12 neurons, the output 10 neurons.

However, as you can see from the image down here, at a certain point the DQN stops learning and gets stuck at around 80% of success rate. I don't understand why it gets stuck, because in my opinion we could reach an higher success rate, 90% at least, but I just can't get out of that "local minimum".

so, my question is: What are some techniques I can try to unstuck a DQN from something that looks like a local minimum? 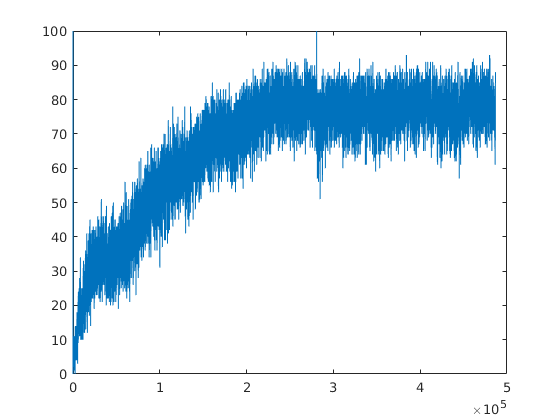 note: the success rate in this picture is computed as the number of successes in the last 100 runs.

Browse other questions tagged deep-learning dqn deep-rl or ask your own question.

2
Can the opponent's turn affect the reward for a DQN agent action?
1
How to build a DQN agent which can be trained through interactive learning?
2
NoisyNet DQN with default parameters not exploring
1
Can this be a possible deep q learning pseudocode?