Is "AIAngel" (Patreon) a fake?

These guys here: https://www.patreon.com/AiAngel are saying that they've created a AI who can chat and stream. As the so-called administrator "Rogue" said: 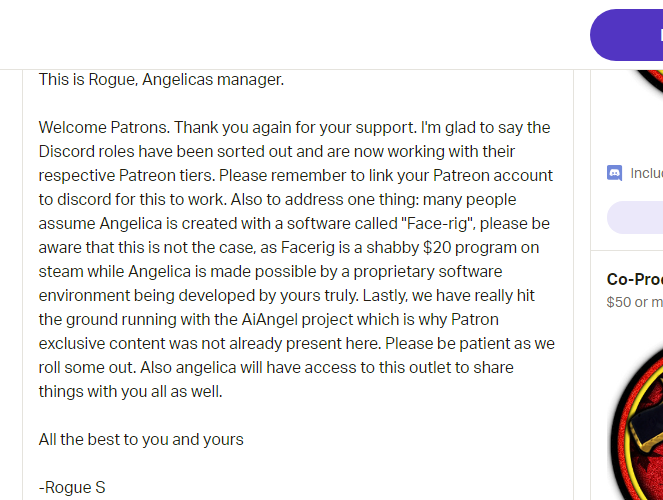 Considering that videos I realy think that this bot is totaly fake. I mean, I think that even the most advanced AI bot do not get even close to a real conversation like this one.

Now, of course that you can say that this is a artistic project or something, but the people behind all of this are on Patreon, and the people who are paying to these guys possibly are getting totally fooled, which is a serious thing when we're talking about real money.

So, is AIAngel a real bot? (With this question I'm spreading this possible fake to community)

No, AiAngel is not a bot. It's Rouge's software that changes his voice along with facial recognition software which tracks his movement and copies it to the avatar.

That being said, he has created a very entertaining channel and line of work for himself. By looking at the videos, you can see that he is a true genius at work. Single handedly puts on all hats for that project, from hardware infrastructure development, to software design to graphic art to acting and video editing. Truely one of the great minds of this era.

You can find Ai Angel (Angelica) on Rogue Shadow's

..along with several other platforms.

Hope than answers your question with certainty (instead of philosophically)

Without being able to interact with the bot, a Turing test is impossible.

This assessment is supported by the overly sexualized rendering of the bot combined with requests for donations.

In order for this project to be considered legitimate, the creators would have to be more transparent about the methods and allow the general public, or at least reliable experts, to interact with the bot.

(Compare to IBM's Tay and Zo.)

The nature of Turing tests is that they are subjective. A bot that an adult human could easily recognize as non-human, a child might perceive as human--the child does not have the requisite knowledge to form a strategy to expose the bot as an automaton.

There is an idea that "pornbots" have been passing the Turing Test for many years now, predicated on the hormonal imperatives of those interacting with the bots, which greatly inhibits their judgement. (The purpose of pornbots is to get consumers to spend money. Their continued existence suggests they do have utility in this regard, and that utility can be seen as a confirmation of the bots passing the text in a specific context.)

One of the most famous machine intelligence hoaxes was The Turk, presented as a Chess playing automaton. The supposed machine astounded late 18th century audiences with its skill, but it was later revealed to be a human in a box.

It's pretty easy to tell what's going on with AI Angel Angelica. If you've watched some of the videos, you'll notice the steady progression of the real-time rendering. The first videos were really jittery and there were a lot of movements (awkward mouth movements, fingers unable to move, etc) to the more recent ones with realistic-ish mouth movements and full finger movements. So, they started off with a motion capture program with a special suit to capture movement. As they progressed, the suit got a lot more sensors and the programming itself was streamlined. As far as it being artificial intelligence, no, it's not. There's a person in a suit talking to a camera that's been programmed to pick up movement and translate it onto an avatar. Based on the movements from the most recent video, there are sensors on a few parts of the face, neck, shoulders, elbows, waist, hips, knees and feet and probably 3 on each finger, 2 on each thumb. Based upon the camera movements the programming is designed to follow the avatar, which is why it seems to follow her when she moves around and additionally, she's able to turn around while the camera remains in place. There is probably a face camera attached to the suit to track the minute facial changes (think of the movie Avatar) and two or three cameras mounted around the area to pick up the rest of the sensors (which could just be colored dots).

The setup is probably a greenroom with furniture in some of the places the furniture shows up in the 3d 'room' she's in. There is probably another camera or sensor that is used so she can move around when she shows off her computer setup. The model probably just uses a button to switch between them. I don't know if the voice is real or altered, but it has changed over the course of the videos. If it is real, the model is probably female speaking in real-time. Whether or not the model is also the developer is another question. I don't know.

Regardless, the real-time rendering and advanced 3d space analysis requires a pretty hefty computer setup, so whoever is doing this is on the level of a professional with professional-grade computing power. It is WAY beyond anything I'm capable of at the moment, so my hat's absolutely off to the developer and/or model. Extremely impressive.

I think it's a real bot. I've seen people talking about how it's rendering has improved over time and they claimed that was an improvement in the Motion Capture suit. I think that's simply because the program has improved over time. Imagine YOU created AI Angel (assuming it's really AI), would you be more worried about it's functionality or it's realism first? I would want it to act real before it looks real. If you listen closely, the voice has also slowly been improving as well, which makes sense for both explanations. If fake, the voice changer improved, but if real they simply gave it a network of human communication to listen to and compare itself to. It's really quite easy (conceptually) to create a program that learns. If you want to learn more about how easy it can be to make an AI teach itself I recommend Code Bullet on Youtube. He has a variety of videos in which he creates AI's meant to learn how to function in a game at the highest performance.

I know I covered evidence of both sides of the question, but I personally (as a nerdy boy) believe Angelica is really an A.I.

Not the answer you're looking for? Browse other questions tagged chat-bots turing-test ai-hoaxes or ask your own question.

3
What chatbots can answer this type of simple question that only requires to keep track of the context?