I am reading the paper Convolutional Sequence to Sequence Learning by Facebook AI researchers and having trouble to understand how the dimensions of convolutional filters work here. Please take a look at the relevant part of the paper below. 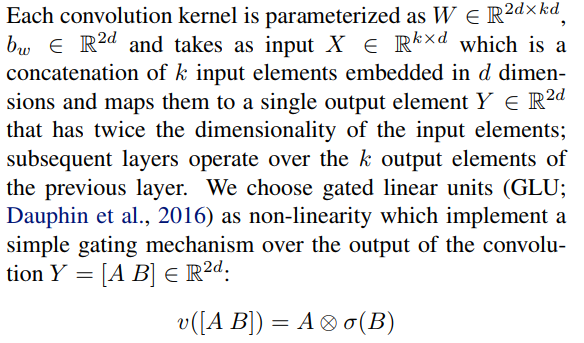 Let's say the input to the kernel X is k*d (say k=5 words of d=300 embedding dimenisonality). Therefore the input is 5*300. In a computer vision task a kernel would slide over parts of the image, in NLP you usually see kernel taking up the whole width of the input matrix. So I would expect kernel to be m*d (e.g. 3*300 - slide over 3 words and look at their whole embeddiings).

However, the kernel here is of dimensionality 2d x kd which in our hypothetical example would be 600*1500. I don't understand how this massive kernel would slide over an input that is by far lower dimensional (5*300). In computer vision you could zero-pad the input, but here zero-padding would basically turn the input matrix into mostly zeros with only a handful of meaningful numbers.

Thanks for shedding some light on it!

Having listed above hope things could become a little clearer: If we adopt the same concepts as we seen in typical CV scenario, per my understanding, the size of convolutional kernel is only $k$, but the count of kernels, or the dimension of new "channel", is set to $2d$. One kernel maps $k \times d$ elements into one element, $2d$ kernels together convert the input to a vector of which the dimention is $2d$

The key problem that roots the confusion is beause, in my opinion, the "kernel" imported here is a little different from the same concept used in a typical CNN. Again, if we describe in a traditional CNN terminology, the kernel size should be $k$, and there are $2d$ kernels applied.

Hope my understanding is correct.

4
What do the words "coarse" and "fine" mean in the context of computer vision?
3
How does Continuous Bag of Words ensure that similar words are encoded as similar embeddings?
4
What is the stride information of an image referring here?
0
Non-sliding kernels for location-aware processing in Convolutional Neural Networks
1
Sequence Embedding using embedding layer: how does the network architecture influence it?