Consider the grid world problem in RL. Formally, policy in RL is defined as $\pi(a|s)$. If we are solving grid world by policy iteration then the following pseudocode is used: 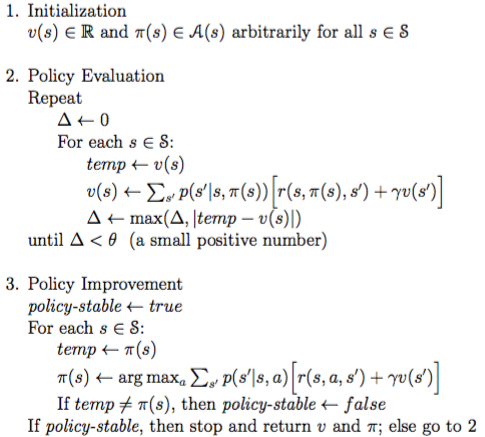 My question is related to the policy improvement step. Specifically, I am trying to understand the following update rule.

I can have 2 interpretations of this update rule.

computes the action that is expected to give the highest return, given the current and fixed value function $(v_k$). Have a look at the definition of expectation for discrete random variables: it is defined as a weighted sum (like in the update rule above, where the weights are $p(s' \mid s, a)$).

Value iteration is a shorter version of policy iteration. In VI, rather than performing a PI step for each state of the environment, when performing PE, the action that is expected to give the highest return is chosen. In VI, the policy is updated only once and at the end of policy evaluation. In PI, you alternate between PE and PI, and, at each PI, you update the policy.

1
Unable to understand the second iteration update in value iteration algorithm for solving MDP
4
Why is my implementation of Q-learning not converging to the right values in the FrozenLake environment?
1
Monte Carlo epsilon-greedy Policy Iteration: monotonic improvement for all cases or for the expected value?
7
How is the DQN loss derived from (or theoretically motivated by) the Bellman equation, and how is it related to the Q-learning update?
1
Bellman Expectation Equation leading to results where value iteration would not converge to the optimal policy
2
Factors that affect the number of iterations of value iteration
0
How is policy iteration capable of improving on a deterministic policy?