Our customer runs a tour agency. He has an excel spreadsheet containing the following information for people that have contacted them:

Customer name, country, tour duration (requested by customer), tour date, number of people in the tour (usually from 1 to 3), price given to the customer, answer: accepted/rejected (indicates if customer accepted or rejected the price given by the tour agency).

My customer wants a predictor or tool that can let him enter the details given by future customers, e.g:

Number of participants, Tour duration, Country (not sure if necessary?)

And the system will return the best price to charge the customer (so he won't reject the proposal but pay the maximum possible).

Is this even possible? I think it may be done using neural networks trained with the previous answers from customers that the tour agency owner has in his excel spreadsheet?

The reality is that the accuracy of such a model/series of models would depend entirely on the quality and quantity of the data, but it's unlikely that in this case a neural network would provide a better result than smart usage of simpler models.

Background Before Attacking the Problem

A process, whether done with a pencil and paper, entirely mentally, through a custom algorithm, or using a more general AI approach, that selects best price for a product or service is an optimization process rather than a prediction one. Prediction is the process of using current state and possibly the historic trend leading to it to determine the distribution of probabilities of a future state.

Pricing is an ongoing optimization problem because the price can be set and changed during the market period. Setting a price and leaving it that way for the duration of a business is a bad idea. If the algorithm applied adapts to changes in the market, such as consumer attitudes, branding goodwill, changes in the use of the product or service, cost of procurement, or the emergence of similar vendors, then it would be a continuous learning system.

Note that continuous learning systems must either run in parallel with the actual pricing process or be reentrant so that it can share the same computing hardware, however, it need not be of the reinforcement learning type, which assumes a sequence of actions based on a distribution of expectations associated with each option. If the Markov property is applied, the actions are based only on the state of the system at the time of the choice. Otherwise, the history of states may be used in the determination of expectations and thus also action selection.

Also note that artificial networks are not the only type of continuous learning system. T-cells learn antigen indicators and provide adaptive immune response. Natural neurons do continuous and massively parallel learning. The very first artificial continuous learning system was probably Claude Shannon's electromechanical mouse, Theseus, that learned about a maze through trial and error, but could be dropped into the same maze it learned previously and continue learning where it left off. Thus, it was reentrant.

In the specific case, we have fields of records that could be used for basic data centered learning.

The goal is to automate the quoting to optimize profit over time. The most primitive and perhaps easiest approach is using the most basic type of artificial network in common use, the multilayer Perceptron (now commonly called a FFN or feed forward network). In such a case, the following design features might be reasonably successful.

The total gain, if a margin column is added, would be

where $N$ is the number of rows, $o_r$ is the outcome of 1 or 0 for paid and not paid respectively, and $m_r$ is the margin of the sale. The margin is the revenue via payment minus the associated expenses.

The inverse of what is inside the summation is the natural expression for the loss of each row.

Note that this formulation dismisses marketing and other overhead expenses, so if applying this to decisioning for how to market, the $p - e$ representation would be more appropriate.

Limitations of MLPs and Future Directions

The result would be limited in that the trained network would then be a static function, which doesn't take into consideration many facets business intelligence involved in optimal pricing. Also note, again, that this is not a prediction function. It is a primitive optimization. The tuned pricing function that results from the training is optimized to the degree that a typical MLP, learning approach, and data set containing only the rows and columns noted can optimize.

Optimizing price opens up a can of worms, but the starting point may be to implement the initial MLP with a few layers and grow the skill level in automating these more advanced pricing strategies over time.

In summary, it is recommended that the AI vendor learn how to make the computer learn how to learn to price. In the most advanced stage, the learning is meta-meta-learning — three levels deep in learning or adaptation.

The outcome, $o_r$, is the switch that determines whether the margin is included for that row. If you code $o_r$ to be -1 for no sale and 1 for a sale, the "natural" aspect of the expression will be more obvious, but learning will proceed almost identically for either coding when seen as parameter adjustments to the cell inputs because all linear operations real numbers in gradient descent have no effect. Only when the numbers approach the range and accuracy limits of the variable type used in the actual software do linear operations matter at all. In those cases, you'll see the term saturation used, which is a term from control systems theory.

For your initial project phase you need only know that $g_r + \mathcal{l}_r = K$ and the constant $K$ is not relevant in gradient descent. For those with calculus background, the differential equation resulting from the above is simply

... become a static function? The idea is that every time a customer contacts the vendor he uses the system to get the highest price the customer may accept and pay. After that he will insert the answer into the system (the system may have not accepted the price). So it will continue learning.

As might be expected, the resulting retrained network has a higher probability of producing an improved pricing system than a degraded one relative to the previous training session. The pricing system will slowly improve, but not because of continuous learning. What would be occurring is the recreation of a static function as a trained network with continuously increasing data set size. Accuracy and reliability tend to improve as data set size increases.

Continuous learning is either reentrant, parallel, or both, meaning that the training does not start from scratch but the algorithms and/or parallel processes involved are designed to continue from any point and improve without fully discarding previous final or intermediate processing results.

Although the accuracy and reliability of the results of full retraining is better than training once and not retraining, the computational cost of starting from scratch each time is high. More importantly, it is primitive, and the technology goal is usually to move toward a system that truly replaces human pricing expertise, This first phase of such a project falls short of a system that integrates with marketing systems and learns how to put on sales or vary the price strategically in other ways to hook new customers, retain them, up sell, and augment offerings.

Price finding with artificial agents is on the first look a problem which has to do with calculating numbers. The price of the service is located somewhere in the range from 0 up to max and the system has to print out the value. Unfortunately, mathematics alone won't solve the issue. Because the price is only the result of a textual conversation and an information seeking process.

To grasp the complex situation of efficient markets and bid/ask relationships the underlying model has to be equipped with natural language processing capabilities. This will make the technical side more complex. A possible implementation is based on a price-negotiating prediction engine. That means, the agent is able to anticipate which price the customer will accept.

Such an engine is equal to a customer simulation. The customer and it's price sensitivity are modeled and this model is used to predict how the customer will decide. An easy to realize technique are behavior trees. 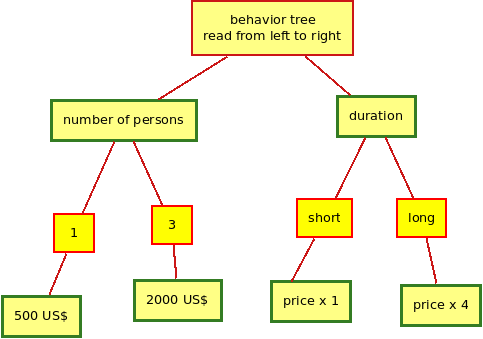 Not the answer you're looking for? Browse other questions tagged neural-networks deep-learning prediction or ask your own question.