How does adding a small change to an neuron's weighted input affect the overall cost?

I was reading the following book: http://neuralnetworksanddeeplearning.com/chap2.html

and towards the end of equation 29, there is a paragraph that explains this:

However I am unsure how the equation below is derived:

I believe he's just saying that:

so that the change in cost function can be arrived at simply for a small enough perturbation $\Delta z_j^l$.

If the the linear output of node $j$ in layer $l$ is now $z_j^l + \Delta z_j^l$, then the partial derivative with respect to $z_j^l$ becomes

The image shows a tangent line to a curve or function $f(x)$. The slope of this tangent is given by $\frac{df(x)}{dx}$ at that particular $x$. If you move by a very very small amount in the direction of positive $x$ i.e. $x+\delta x$ the change in the value of the $f(x)= y $ will almost be the same as the change in the value of the $y$ of the tangent line. 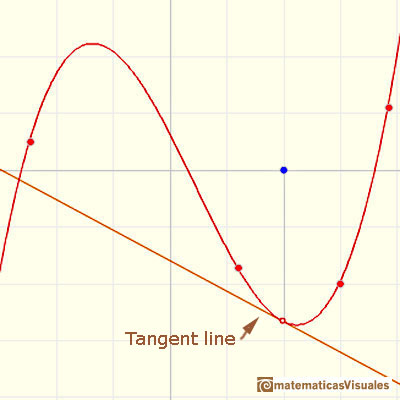 Now as per the excerpt the cost function $C$ is a function of $z_j^l$. Thus, it can be written as $$C = f(z_j^l, .....).$$ So, $$\frac{\partial C}{\partial z_j^l}$$ indicates how much $C$ will vary w.r.t $z_j^l$, i.e. when $z_j^l$ is changed by an infinitesimally small amount and thus the formulae: $$\frac{\partial C}{\partial z_j^l} \Delta z_j^l$$ where the author assumed $\Delta z_j^l$ to be very small. This gives the infinitesimal change in $C$ or gives us $\Delta C$, for infinitesimally small change in $z_j^l$ or any varible affecting the cost function. This can be derived by series expansions too (given below), but this is an intuitive explanation.

An explanation can be given from Taylor Series Theorem which states: :

Now if we keep other variables constant and make cost function $f$ vary only with $z^l_j$ and if we put $a=z^l_j$ and $x=z^l_j + \Delta z^l_j$ the equation becomes:

which if we ignore the higher order terms of $\Delta z^l_j$, since terms containing $\Delta z^l_j$ for powers greater than 1 will be negligible compared to $\Delta z^l_j$ with power 1. Thus the equation now effectively is:

NOTE: I have glossed over some requirements for a Taylor Series to be convergent.

Not the answer you're looking for? Browse other questions tagged neural-networks backpropagation or ask your own question.

5
Why is the change in cost wrt bias in neural network equal to error in the neuron?
3
A few doubts on back propagation
2
The analysis of the dynamic behaviour of neural networks involving the application of feedback
4
How can I implement back-propagation for medium-sized neural networks?
1
Implementing Gradient Descent Algorithm in Python, bit confused regarding equations
1
When are multiple hidden layers necessary?