Has anyone been able to solve OpenAI's hardcore bipedal walker with their implementation of DDPG?

As the question suggests, I'm trying to see if I can solve OpenAI's hardcore version of their gym's bipedal walker using OpenAI's DDPG algorithm.

Below is a performance graph from my latest attempt, including the hyper parameters, along with some other attempts I've made. I realise it has been solved using other custom implementations (also utilising only dense layers in Tensorflow, not convolution), but I don't seem to understand why it seems so difficult to solve using OpenAI's implementation of DDPG? Can anyone please point out where I might be going wrong? Thank you so much for any help! 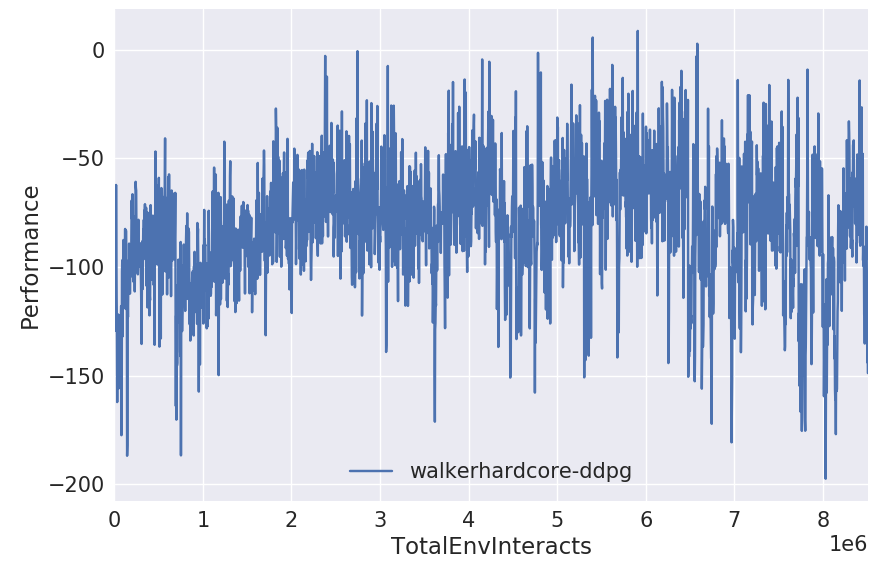 Thank you so much for any help! It would be greatly appreciated!

You may be very interested to know that there was a bug in the v2 Lidar tracing, making the agent think there were phantom objects, and sometimes intersecting with its own legs:

Finding this bug makes me even more impressed anyone has solved BipedalWalkerHardcore-v2 - it seems the observations from lidar have been inconsistent and incorrect, returning the furthest hit result instead of closest.

Before fix - lidar traces through ground, and hits the side of a pit, giving the agent the impression of a "phantom canyon" in front of the pit, that only appears as it approaches the pit: https://i.imgur.com/XKPnRTR.png

After fix - lidar is stopped by terrain, even when another object is behind it: https://i.imgur.com/Gg8B5BD.png

After triple checking the docs - I've submitted a minor tweak (returning -1 instead of 1 for an object that should be ignored) - it now seems legs are correctly ignored, and the traces are accurate in all situations!

It seems to me that solutions to BipedalWalkerHardcore-v2 have not just learned to deal with the complex environment - but advanced a step ahead, and are able to deal with the complex environment and sensory hallucinations causing them to jump at the slightest hint of a cube, and keep running even when it looks like the ground is not visible below their feet, relying more on the touch sensor than the lidar, or perhaps recognising the difference in "shape" between a real pit and a "fake pit" (A real pit has a floor)

You might want to try retraining your agent now! (although it is still a difficult environment to solve)

To expand on why DDPG doesn't solve it, when although buggy, BipedalWalkerHardcore-v2 is solvable: The solution landscape to this problem is as full of pits as the environment itself. To learn to leap over a pit in the environment for example, the agent must perform a complex sequence of actions that is difficult to discover by random chance. Each time it fails, it learns that being close to a pit is highly likely to result in a large penalty, and in an effort to maximise it's rewards, will often remain stationary with a naive method like DDPG as the rewards for doing that are higher than trying and falling into the pit once more. In short, vanilla DDPG lacks enough exploration power to find the complex series of actions required before it converges on not going near the pit. Not to mention all of the other things it needs to learn to be successful.

Of the very few published examples that have solved it, one used Evolutionary Strategy - a gradient free method essentially trying millions of policies and evaluating them, and a custom A3C method that was tailored to solve this particular environment. Both had high computational and sample requirements. I speak from experience as I have personally solved this environment with a RL exploration algorithm that generalises to other environments, solves it in 4 hours on a single cpu, and can be used with any off-policy RL algorithm, but unfortunately I'm unable to publish it because of IP with the company I work for.

TLDR; The chance of vanilla DDPG solving it are infeasibly small.

I've been working with a TD3 implementation for bipedal hardcore. It solved the easy version (v2 and v3) in about 300 epochs (https://github.com/QasimWani/policy-value-methods). I've been training it for hardcore and even after about 1200 episodes, it's no where close to convergence. Did you end up solving, and if so, what algorithm did you end up going with? Cheers, Q.

Our recent work solves this problem by using the idea of a forward-looking actor.

We use a neural network to forecast the next state given the current state and current action. Then plug it into the actor training with considering the value of future states. We use our idea on TD3 and make a new algorithm TD3-FORK, which solves this problem with as few as four hours. https://github.com/honghaow/FORK/tree/master/BipedalWalkerHardcore