Are simple animal snares and traps a form of automation? Of computation?

I'm trying to understand the relationship of humans and automation, historically and culturally.

I ask because the waterclock is generally considered the earliest form of automation, but snares and deadfall traps constitute simple switch mechanisms.

(They are single use without human-powered reset, but seem to qualify as machines. The bent sapling that powers the snare is referred to as the engine, which is "a machine with moving parts that converts power into motion.")

If snares and traps are a form of automation, automation has been with us longer, potentially, than civilization. 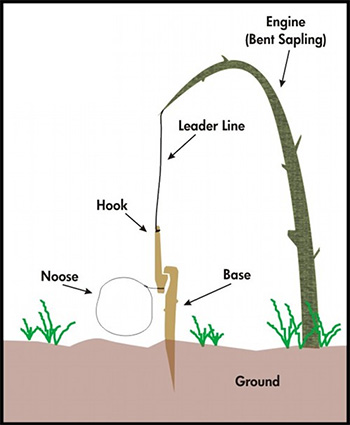 How to make a simple snare (the Ready Store) 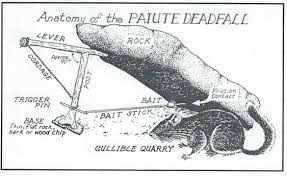 They take a task--harvesting small animals--which was traditionally done by hunting them, and make the process automatic. The mechanism requires a human to set up, but its function is automatic. This is to say that the mechanism operates without human involvement.

As DuttaA observed, these machines utilize a simple "IF/THEN" statement. In the case of the snare:

IF the hook is displaced from the base, THEN the sapling straightens

These simple machines will also return True or False:

The small animals are the input and, potentially, the output, depending on whether the mechanism returns "true".

(The use of "true" has historically included phrases such as "their aim was true" in the sense of shooting an arrow or throwing a spear.)

It is not unusual for the friction of the trigger device to be deliberately reduced so that $k \ge 100$, meaning that the energy transferred from the animal to the trigger is no greater than 1% of the energy unleashed on it.

That the system has

These qualify early traps not only as machines but as automatic one. The human that set the trap does not perform the identity function. The triggering design was performed in advance by humans, and even the purchaser of the trap need not understand it to set it and capture an animal. This clearly fits the formal definition of automation.

No. The identity function does not require computation.

This is not the only historical or cultural aspect to the information science involved. That the existence of the trigger and the action it triggers must be unknown to the animal is part of the information science involved. The secrecy is part of the mechanism, and the secrecy may not involve hiding the trigger or the spring mechanism from the animal. That the animal does not understand mechanical engineering may be ample secrecy for an animal that has not learned in DNA (by repeatedly eliminating lines of offspring that could not visually discern that something was amok) or

Does the System Learn?

Is Any Learning Involved in Mechanical Traps?

Certainly. For the earliest traps to be fabricated, much had to be learned in advance by humans, again, either parametrically in DNA or in the human brain through experience or through language and education. These are just a few of many cognitive transitions that had to occur, represented as sentences.

It is interesting to note that to artificially recreate the above learned understandings, both DNA and neurology were involved but not gradient descent, because the experiments and the analysis of results were discrete and no gradient could be calculated. It is also unlikely that it was entirely trial and error in searching for better ways to get fed. This is why logic based AI continues to be an important area of research.

Not the answer you're looking for? Browse other questions tagged history automation computation or ask your own question.

2
Can you provide some pseudocode examples of what constitutes an AI?

8
What are the most recent and influential breakthroughs in NLP?