How should I interpret the weights file of the Leela Zero neural network?

I am trying to understand the NN architecture given at https://github.com/leela-zero/leela-zero/blob/next/training/caffe/zero.prototxt.

So, I downloaded the NN weights from http://zero.sjeng.org/. However, I am not sure how to interpret the network weight file. 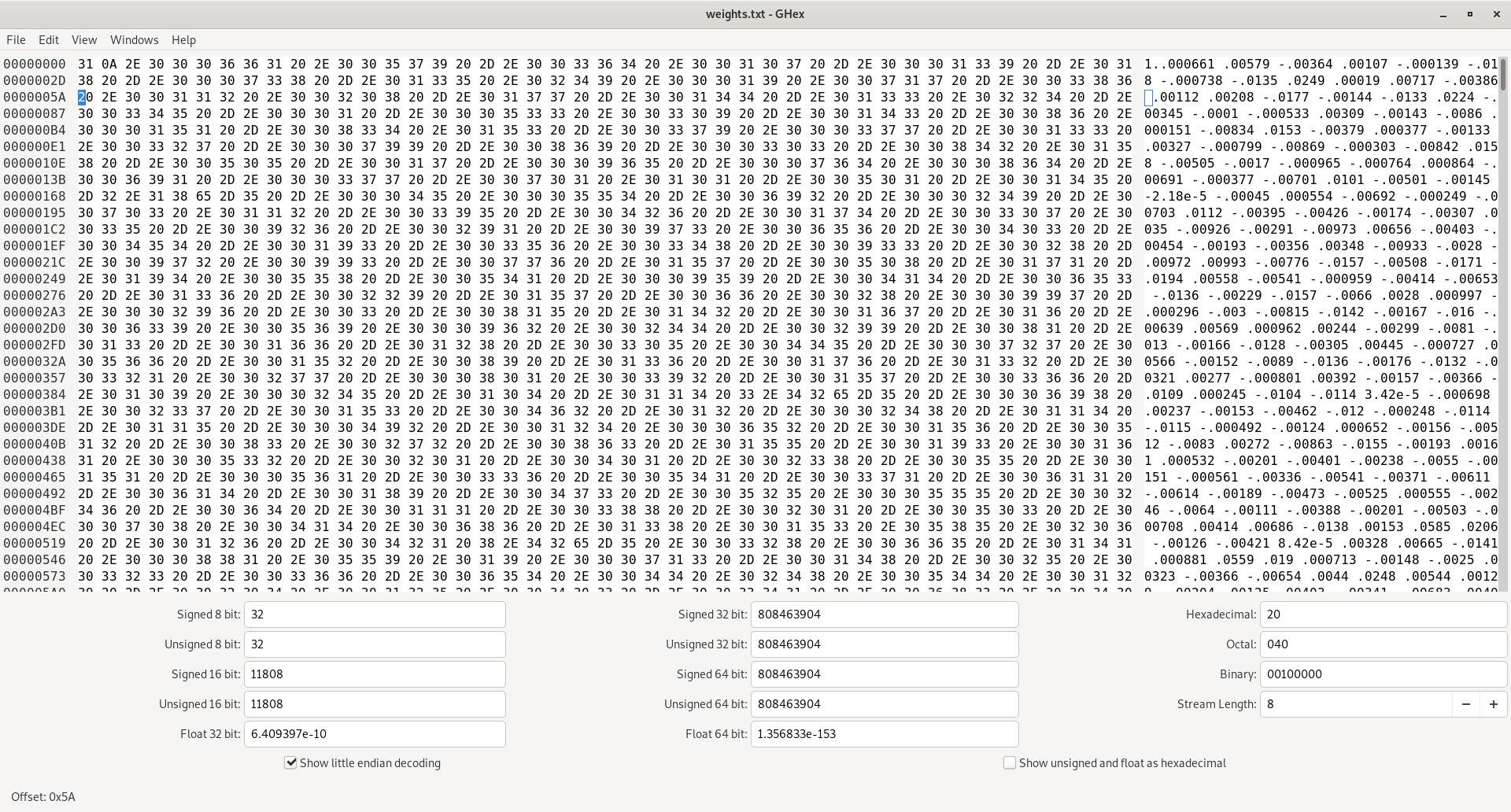 What exactly are you trying to understand from this?? What you seeing are the different values of various weights of the nodes in the network. Beyond that, it really doesn't make much sense to try to interpret outside of the problem and architecture.

How should I interpret the weights file of the Leela Zero neural network? ... However, I am not sure how to interpret the network weight file.

The image shown in the question has a set of network parameters listed as a series of floating point values in ASCII or utf-8 on the right. The equivalent hexadecimal values for those characters are shown on the left. There is no point in viewing these numbers at all. They are not in a form that can be readily interpreted by the human brain. Even for the simplest cases, one would need eidetic memory, extremely high math aptitude, and decades of training to derive any meaningful information from such a multidimensional array of floating point numbers.

They represent the result of convergence during network training, and their values were determined so that the optimal signal strengths pass from cell to cell in subsequent layers during the exercising of what was learned in its intended use.

I don't see anything that will help you understand the leela-zero design at that the URL given in the question. The layer definitions would need to be generalized before it could become clear what approach was taken to arrive there.

In the README.md for the project (down the page at https://github.com/leela-zero/leela-zero/) there is a section called Related Links. Read the PDF documents there in the order they were authored. You may have to go further upstream than that to understand those PDFs by reading the documents referenced by them.

Not the answer you're looking for? Browse other questions tagged neural-networks reinforcement-learning chess alphago-zero or ask your own question.

6
How is gradient calculated for middle layer weights?
0
How do I update the Q values of a Deep Q Network when exploring?
0
How to shape the weights or nodes during gradient training of neural network? Training with constraints?
7
How can alpha zero learn if the tree search stops and restarts before finishing a game?
3
How Does AlphaGo Zero Implement Reinforcement Learning?
1
How does the CTC loss work?
6
How to deal with large (or NaN) neural network's weights?