I am trying to rank video scenes/frames based on how appealing they are for a viewer. Basically, how "interesting" or "attractive" a scene inside a video can be for a viewer. My final goal is to generate say a 10-second short summary given a video as input, such as those seen on Youtube when you hover your mouse on a video.

I previously asked a similar question here. But the "aesthetics" model is good for ranking artistic images, not good for frames of videos. So it was failing. I need a score based on "engagement for general audience". Basically, which scenes/frames of video will drive more clicks, likes, and shares when selected as a thumbnail.

Do we have an available deep-learning model or a prototype doing that? A ready-to-use prototype/model that I can test as opposed to a paper that I need to implement myself. Paper is fine as long as the code is open-source. I'm new and can't yet write a code given a paper.

One of the key terms in the literature that you are looking for is video captioning.

You can have a look at some of the relevant papers with code on this subject. In short, it is an active area of research and a difficult problem, one reason is because videos are still difficult to learn about (because of larger amount of data + larger model, etc...) and this model has to be working with two modalities of data: text and image.

A paper that you might want to start with is Deep Visual-Semantic Alignments for Generating Image Descriptions which works on single images. In short, you can use something similar like in the paper: object detector (e.g. Faster RCNN) to extract visual features and feed them into the state of an RNN (LSTM) which would output a sequence of words in your summary (see picture below). 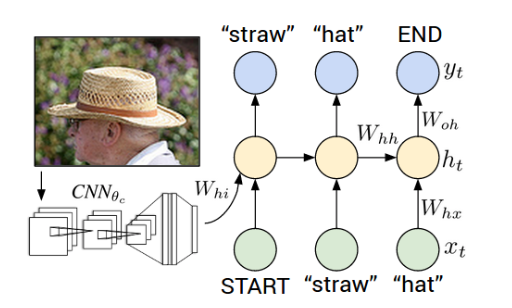 Not the answer you're looking for? Browse other questions tagged neural-networks deep-learning classification computer-vision image-processing .