What are some reasonable benchmarks to compare the performance of various algorithms for reinforcement learning in discrete MDPs? Instead of using a random environment from the space of all possible discrete MDPs on $n$ states and $k$ actions, are there subsets of such a space with more structure that are more reflective of "real-world" environments? An example of this might be so-called gridworld (i.e. maze-like) environments.

This is a related question, though I'm looking for specific examples of MDPs (with specified transitions and rewards) rather than general areas where MDPs can be applied.

Although I am not aware of any "benchmark problems" for (discrete) MDPs, I'll comment a bit on possible benchmarks and I will show some benchmarks used to test POMDP algorithms.

In Markovian Decision Processes (MDPs) the whole state space is known, this means you know all the information for your problem; therefore, you can use them to find solutions for perfect information problems or games. Many of these games could use an MDP, some examples: 2048 and chess. Note that you must take into mind that the computational complexity grows with the number of states. Although I could not find any benchmarks for MDPs, games with perfect information can be used to compare MDP solvers.

When a problem or game has imperfect information, you should use a Partially Observable Markovian Decision Processes (POMDPs); in which you do not need to know the current state, but you keep track of the probabilities of being in any of the (discrete) states. 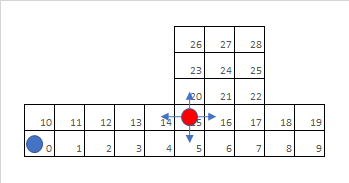 These problems tend to be of the same size (number of states and actions) such that the results of different algorithms can be compared easily.