Can someone please help me validate my MDP?

Problem Statement : I have a system with four states - S1 through S4 where S1 is the beginning state and S4 is the end/terminal state. The next state is always better than the previous state i.e if the agent is at S2, it is in a slightly more desirable state than S1 and so on with S4 being the most desirable i.e terminal state. We have two different actions which can be performed on any of these states without restrictions. Our goal is to make the agent reach state S4 from S1 in the most optimal way i.e the route with maximum reward (or minimum cost). The model i have is a pretty uncertain one so i am guessing the agent must initially be given a lot of experience to make any sense of the environment. The MDP i have designed is shown below : 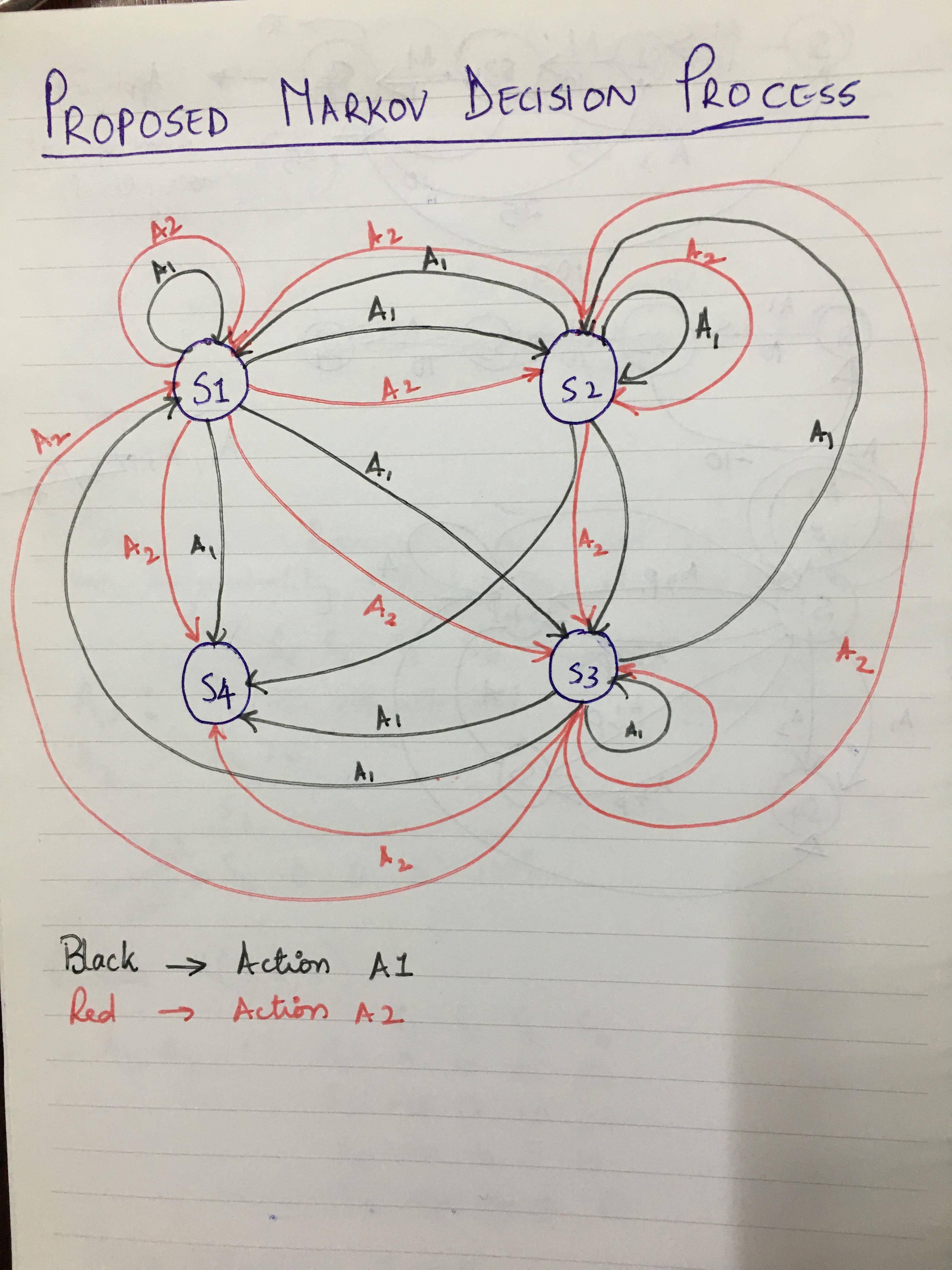 The MDP might a look a bit messy and complicated but it basically is just showing that any action (A1 or A2) can be taken at any state (except the terminal state S4). The probability with which the transition takes place from one state to the other and the associated rewards are given below.

Actions : Available actions are A1 and A2 which can be taken at any state (except of course the terminal state S4).

State Transition Probability Matrix : One action taken at a particular state S can lead to any of the other available states. For ex. taking action A1 on S1 can lead the agent to S1 itself or S2 or S3 or even directly S4. Same goes for A2. So i have assumed an equal probability of 25% or 0.25 as the state transition probability. The state transition probability matrix is the same for actions A1 and A2. I have just mentioned it for one action but it is the same for the other action too. Below is the matrix I created - 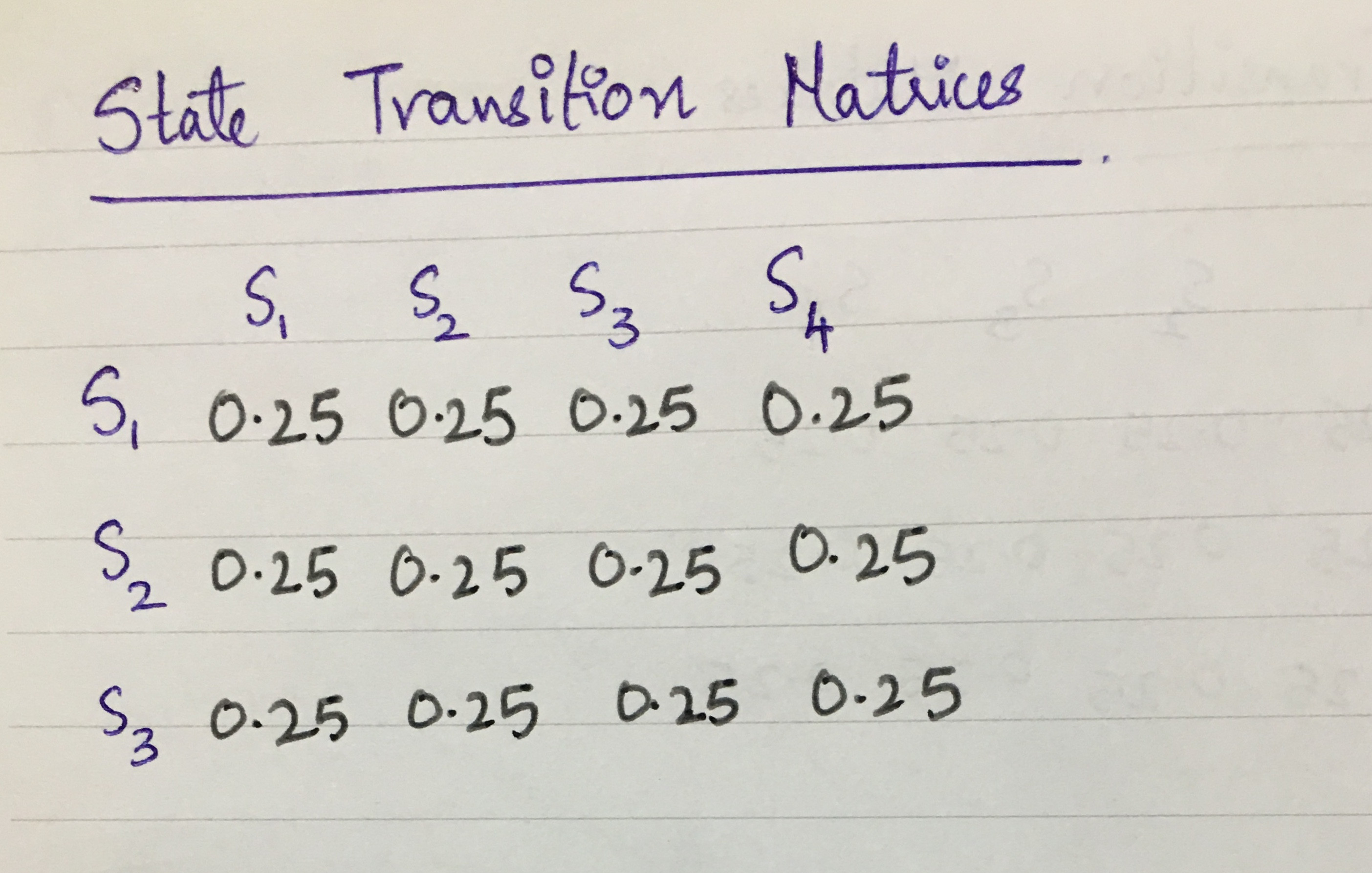 Reward Matrix : The reward function i have considered is a function of the action, current state and future state - R(A,S,S'). The desired route must go from S1 to S4. I have awarded positive rewards for actions that take the agent from S1 to S2 or S1 to S3 or S1 to S4 and similarly for states S2 and S3. A larger reward is given when the agent moves more than one step i.e S1 to S3 or S1 to S4. What is not desired is when the agent gets back to a previous state because of a action. So i have awarded negative rewards when the state goes back to a previous state. The reward matrix currently is the same for both the actions (meaning both A1 and A2 have same importance but it can be altered if A1/A2 is preferred over the other). Following is the reward matrix i created (same matrix for both the actions) - 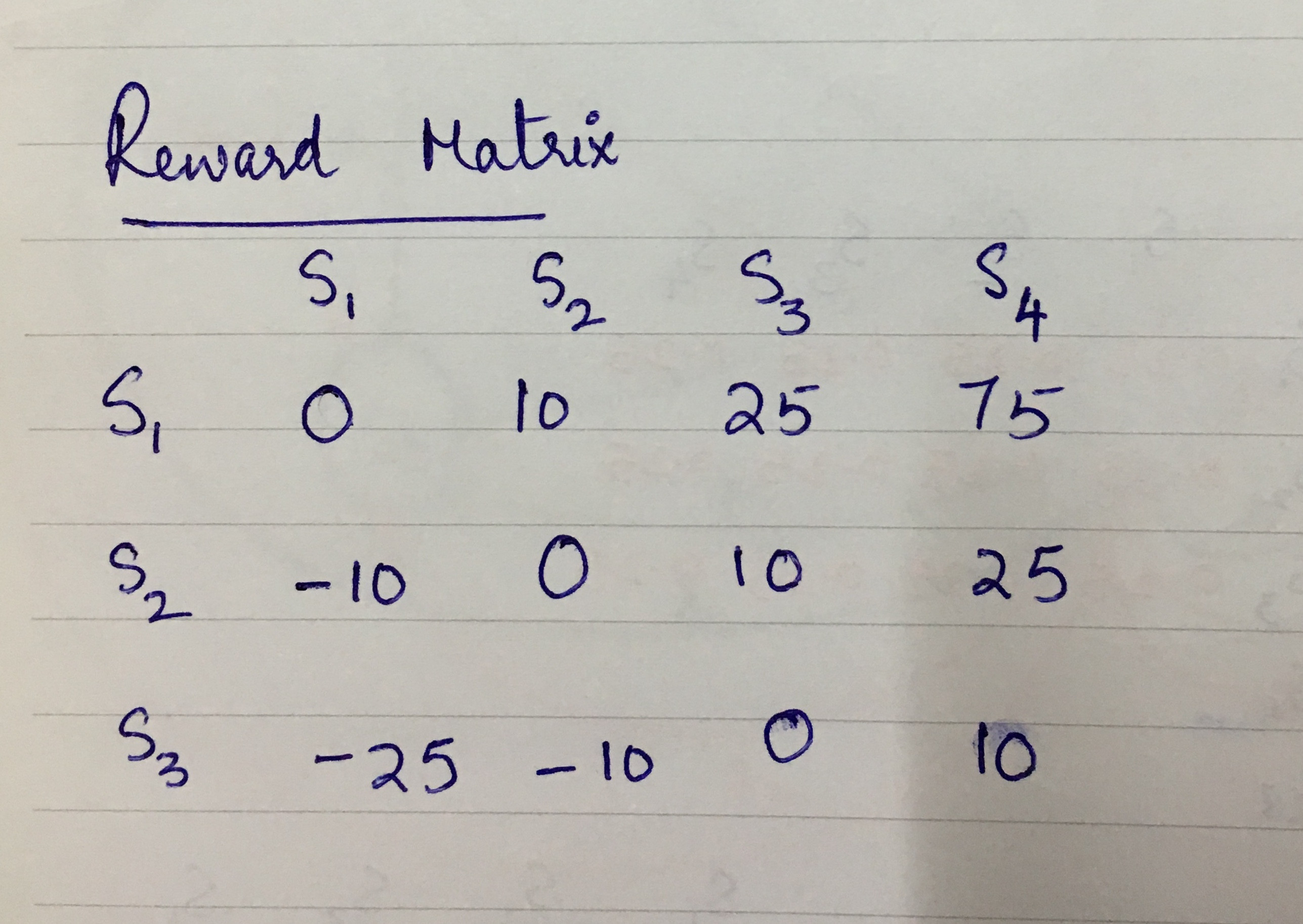 I am totally new to RL and all the above knowledge is from whatever i have gathered reading online. Can someone please validate my solution and MDP if I am going the right way? If the MDP i created will work ? Apologies for such a big write-up but i just wanted to clearly depict my problem statement and solution. If the MDP is ok then can someone also help me with how can the value function iteratively converge to an optimal value? I have seen lot of examples which are deterministic but none for stochastic/random processes like mine.

Any help/pointers on this would be greatly appreciated. Thank you in advance

The good news is that:

The bad news is that:

This whole "bad news" section should not worry you too much though. Instead it points to a different issue. The key point is here:

The model i have is a pretty uncertain one so i am guessing the agent must initially be given a lot of experience to make any sense of the environment.

It looks like you have assumed that you need to explicitly build a MDP model of your environment in order to progress with your problem. So you are providing an inaccurate model, and expect that RL works with that, improving it as part of searching for an optimal policy.

There are a few different approaches you could take in order to learn a model. In this case as your number of states and actions are very low, then you could do it like this:

However, if your construction of the MDP is just step 1 for running some RL policy optimisation approach, none of that is really necessary. Instead, you can use a model-free approach such as tabular Q learning to learn directly online from interactions with the environment. This is likely to be more efficient than learning the model first or alongside the policy optimisation. You don't need the explicit MDP model at all, and adding one can make things more complex - in your case for no real gain.

You probably do still need to define a reward function in your case as there is no inherent reward in the system. You want the agent to reach state S4 as quickly as possible, so you need to monitor the states observed and add a reward signal that is appropriate for this goal. As above, I suggest you modify your planned reward structure to be simple/linear and add discounting to capture the requirement to "increase" state as fast as possible (here I am assuming that being in S2 is still somehow better than being in S1 - if that's not the case, and reaching S4 is the only real goal, then you could simplify further). That's because if you make the rewards for state progression non-linear - as in your example - the agent may find loops that exploit the shape of the reward function and not work to progress states towards S4 as you want.

Beyond this very simple looking environment, there are use cases for systems that learn transition models alongside optimal policies. Whether or not to use them will depend on other qualities of your environment, such as how cheap/fast it is to get real experience of the environment. Using a learned model can help by doing more optimisation with the same raw data, using it to simulate and plan in between taking real actions. However, if the real environment data is very easy to collect, then there may be no point to that.

Not the answer you're looking for? Browse other questions tagged reinforcement-learning rewards policies markov-decision-process .

1
Finding optimal Value function and Policy for an MDP

8
How to fill in missing transitions when sampling an MDP transition table?
6
What is the relation between a policy which is the solution to a MDP and a policy like $\epsilon$-greedy?
3
Can I have different rewards for a single action based on which state it transitions to?
4
Why does having a fixed policy change a Markov Decision Process to a Markov Reward Process?
1
Why isn't the implementation of my policy evaluation for a simple MDP converging?
0
Are optimal policies always deterministic, or can there also be optimal policies that are stochastic?
3
Is the Bandit Problem an MDP?
2
Is there any inherent assumption of start and goal states in an MDP?