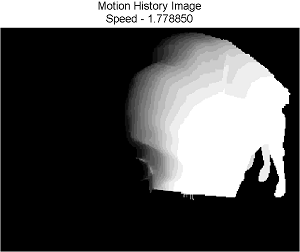 First of all, "Was scared," is not the description of an action. It should be, "Becoming scared." Secondly, "Talking over the phone," is not a proper action description. It should be a conjunctive action such as, "Talking into a phone AND listening to the same phone." To make the list homogenous in format, the first item should be "Car driving," since the actor is human in every other case.

It is unrealistic to think that an artificial neural net, by itself, can be trained to return as output the set of start and stop ranges and associated movie instances from a database of movies and one of the above list items as input. This will require a complex system with many ANNs and other ML devices and may require other AI components that are not activation type networks at all. Certainly convolution kernels and various types of encoders should be considered as key system components.

Verbs like, "Eating," are an abstraction over the top of the motion, and, in the case of eating, the motion is complex. Also, eating is not the same thing as gum chewing, so the sequence detected must be as follows:

The probability of a sequence is the product of the probability of its parts so that math is simple and easy to implement. Concurrency, as in the case of conjunctive actions like talking into and listening to the same phone, is also relatively easy to handle in general.

Certainly, generalization (and more specifically feature extraction) will need to occur in object recognition, collision detection, motion detection, facial recognition, and other planes simultaneously. A complex topology, perhaps employing equilibria as in GAN design, will most likely be necessary to assemble elements of criteria associated with the movie query string and to run windows over the frames of each movie.

If in the movie, only the swallowing is shown, a human can infer eating. That kind of conclusion reliability from sparse data is a huge AI challenge discussed in various contexts throughout the literature.

A system that will acquire its own training information, sustainably grow in knowledge and perform general searches if increasing breadth and complexity may be anywhere from forty to two hundred years out. It is difficult to predict.

Every generation seems to view knowledge growth as an exponential function and tends to make unrealistic predictions about the advent of certain coveted technology capabilities. Most of the predictions fail dramatically. I have come to believe that exponential growth is an illusion created by the inverse exponential decay of interest in the past with respect to time.

We lose track of the energy and rate of growth in eras before us because they become socially irrelevant. People into scientific history, like Whitehead, Kuhn, and Ellul know that technology has moved forward quickly for at least a few hundred years. Vernadsky inferred in his The Biosphere that life may not have arisen, that like matter and energy, it may always have existed. I wonder if technology has been moving at an essentially constant rate for the last 50,000 years.

Not the answer you're looking for? Browse other questions tagged machine-learning image-recognition training action-recognition .