How can we find find the input image which maximizes the class-probability for an ANN?

In short, how do I compute the input which maximizes a class-probability?

In deep networks there is actually a wide variety of solutions to the problem, but if you need to find one, any easy way to do this is just through normal optimization schemes
$$\hat x = argmin_x \ L(y,x)$$
where $L(y,x)$ is your loss function. Since ANN's are generally differentiable you can optimize this iteratively with some form gradient descent scheme:
$$x^{i+1} \leftarrow x^{i} - \lambda \nabla_{x^i}L(y,x^i)$$
where $\lambda$ is your learning rate.

Probably the simplest way to search for an image with the highest probability of being a cat is to use a technique similar to Deep Dream:

There is a good chance that the ideal input you find which triggers "maximum catness" will be a very noisy jumbled mess of cat-related features. You may be able to encourage something more visually apppealing, or at least less noisy, by adding a little movement - e.g. minor blurring, or a slight zoom (then crop) between each iteration. At that point, it becomes a more an artistic endeavour than mathematical.

Here is something I produced using some TensorFlow Deep Dream code plus zooming and blurring to encourage larger scale features to dominate: 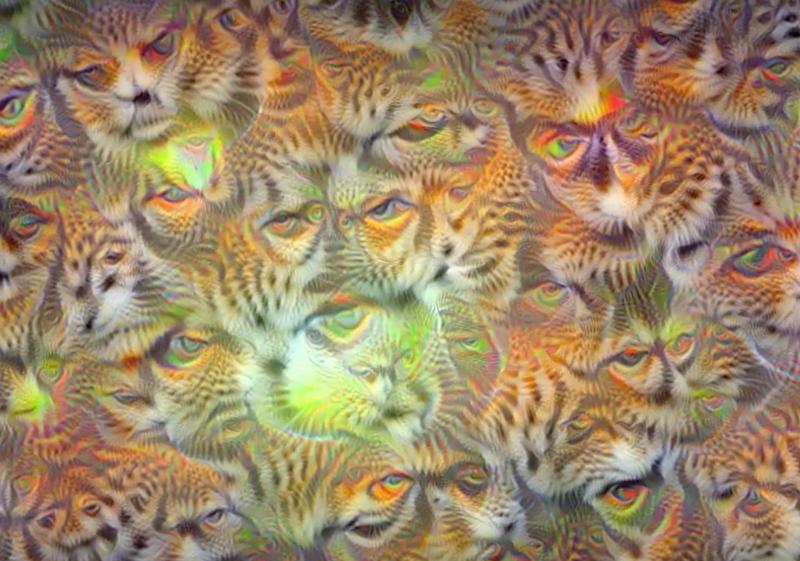 Technically the above maximises a single internal feature map of a CNN, not a class probability, but it is the same thing conceptually.

Not the answer you're looking for? Browse other questions tagged neural-networks generative-model .

1
Which neuron represents which part of the input?
3
Which model should I use to find (only) the object location (in terms of coordinates) in an image?
3
Do we also need to model a probability distribution for the decoder of a VAE?
2
How can I train a neural network for another input set, without losing the learning of the previous input set?
4
What is the input for the prior model of VQ-VAE?
1
How to use sigmoid as transfer function when input is not (0,1) range in ANN?
0
Can we modelize an RNN by an ANN that takes precedent output as a part of input?