I have just started playing with Reinforcement learning and starting from the basics I'm trying to figure out how to solve Banana Gym with coach.

Essentially Banana-v0 env represents a Banana shop that buys a banana for \$1 on day 1 and has 3 days to sell it for anywhere between \$0 and \$2, where lower price means a higher chance to sell. Reward is the sell price less the buy price. If it doesn't sell on day 3 the banana is discarded and reward is -1 (banana buy price, no sale proceeds). That's pretty simple.

Ideally the algorithm should learn to set a high price on day 1 and reducing it every day if it didn't sell.

The trouble is that I don't see any learning progress regardless what I try, even after running like 50,000 episodes. In comparison the CartPole gym successfully trains in under 500 episodes.

I would have expected some improvement after 50k episodes for such a simple task like Banana. 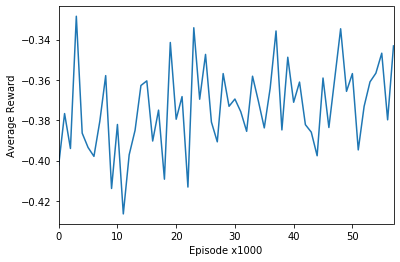 Is it because the Banana-v0 rewards are not predictable? I.e. whether the banana sells or not is still determined by a random number (with success chance based on the price).

Where should I take it from here? How to identify which Coach agent algorithm I should start with and try to tune it?

Browse other questions tagged reinforcement-learning learning-algorithms gym or ask your own question.

4
How to deal with different actions for different states of the environment?
14
Why do you not see dropout layers on reinforcement learning examples?
0
What is the use of the seed function in the gym Environment 'Pendulum-v0'?
0
Is there a way to run other platforms (other than Atari) in an OpenAI's Gym-like environment?
1
DDPG doesn't converge for MountainCarContinuous-v0 gym environment
1
How do I create a custom gym environment based on an image?
1
How to Weigt Constraints in A Control Problem with Reinforcement Learning