How does the forget layer of an LSTM work?

Can someone explain the mathematical intuition behind the forget layer of an LSTM?

So as far as I understand it, the cell state is essentially long term memory embedding (correct me if I'm wrong), but I'm also assuming it's a matrix. Then the forget vector is calculated by concatenating the previous hidden state and the current input and adding the bias to it, then putting that through a sigmoid function that outputs a vector then that gets multiplied by the cell state matrix.

I'd really like to understand the theory behind calculating the cell states and hidden states. Most people just tell me to treat it like a black box, but I think that, in order to have a successful application of LSTMs to a problem, I need to know what's going on under the hood. If anyone has any resources that are good for learning the theory behind why cell state and hidden state calculation extract key features in short and long term memory I'd love to read it.

TL;DR Here is a beautiful explanation with diagrams: source.

The embedding can be long or short term and it is a vector.

The sigmoid layer outputs numbers between zero and one, describing how much of each component should be let through. A value of zero means “let nothing through,” while a value of one means “let everything through!”

Formally the forget vector is:

where $\odot$ is element-wise multiplication.

Thus we see that the forget gate really is acting like a gate: It either lets values pass through or it pushes them toward zero. So, it's purpose is to assign what values to forget/remember.

In summary, the forget gate has the primary purpose of forming a vector of values between zero and one. This vector results by considering the current input and the previous hidden state. The vector is used to forget/remember parts of the previous cell state via element-wise multiplication. So, no, it is not a black box, it is a highly considerate non-linear operation through time.

Recall that multiplying a matrix on the right by a column vector produces a vector, which is a linear combination of the columns of the matrix. So each column of $W_f$ can be seen as a column of "toggles" that push up to 1 or pull down to 0 (once we apply sigmoid). That is, the columns of $W_f$ form a sort of "basis" for a "toggle space."

The LSTM has learned from the data how to make this toggling "meaningful." Below is a simple pictographic example. 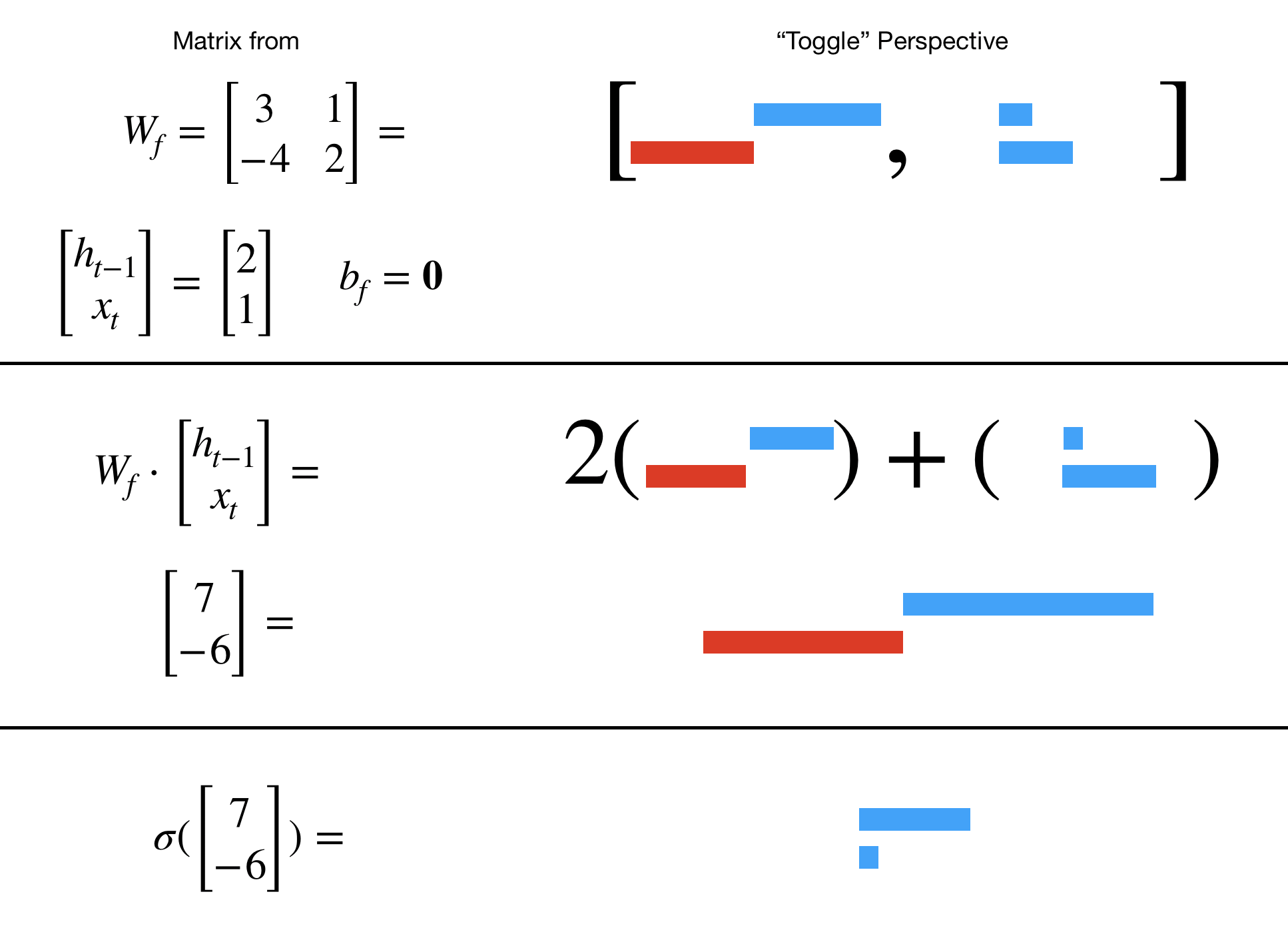 So intuitively, the range of the forget component is a sort of "gate space" where the domain is all vectors of form $[h_{t-1},x_t]$. Formally:

That is to say that the forget gate learns the best mapping from the domain of concatenated hidden/input's to the range of possible gates.

The LSTM is only one of many types of forget-gate mappings. The main takeaway is that the LSTM works empirically for many applications.

That is a forget gate is an instance of a general "gate mapping":

Some data from the past is irrelevant to the current time step. We need a way to correctly "forget" irrelevant information. One way to "forget" is to use a forget gate mapping (like the one in LSTMs). Then we need to optimize the parameters of that forget gate. One implementation is used in the common LSTM architecture. Finally, the concatenation of the previous hidden state provides contextual information to the current input which is very helpful with forgetting.

Here is another view of what is happening in the LSTM from a dynamic point of view: video.

Not the answer you're looking for? Browse other questions tagged neural-networks long-short-term-memory math .

9
How does weight normalization work?
2
How to change the backward pass for an LSTM layer that outputs to another LSTM layer?
0
How does an LSTM output the correct dimensions for classes?
2
Structure discrepancy of an LSTM?
13
What is the relationship between the size of the hidden layer and the size of the cell state layer in an LSTM?
3
What does the Markov assumption say about the history of state sequences?
2
Understanding LSTM through example