How does non-max suppression work when one or multiple bounding boxes are predicted for the same object?

My understanding of how non-max suppression works is that it suppresses all overlapping boxes that have a Jaccard overlap smaller than a threshold (e.g. 0.5). The boxes to be considered are on a confident score (may be 0.2 or something). So, if there are boxes that have a score over 0.2 (e.g. the score is 0.3 and overlap is 0.4) the boxes won't be suppressed.

In this way, one object will be predicted by many boxes, one high score box, and many low confident score boxes, but I found that the model predicts only one box for one object. Can someone enlighten me?

I currently viewing the ssd from https://github.com/sgrvinod/a-PyTorch-Tutorial-to-Object-Detection

Here is the code.

I might be able to help with the theory, but the coding... it is a non standard API such as Tensorflow or Pytorch (it might be custom code for what I can tell).

The key element here is that the bouding boxes are removed only if they hold a prediciton for the same class that the box that is overlapping with (but with less confidence, that is why it gets removed).

Here is an example, where we have:

The three boxes are highly overlaping so the overlap between any box $x$ with any box $y$ will be above the IoU threshold: $IoU(box_x, box_y) > 0.5$. So in principle all boxes are suceptible to be removed.

However the NMS only applies for boxes predicting the same class (in the case the blue one). So the NMS algorihtm is: if the boxes are overlapping, $IoU(box_1, box_2) > 0.5$, which is true, remove all non maximal class probability boxes. Said differently, take just the box with highest $p(c_1)$ and remove the rest. So the $box_1$ with class probability $p(c_1) = 0.8$ would be removed. 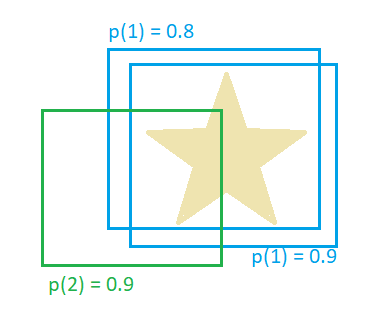 0
How to reject boxes inside each other with Non Max Suppression
0
For an image (of any object), how to find its location in the other image(s) which contains it, given there are no labels or annotations for any image
1
How does YOLO detect the object when the object is in multiple grid cells?