In which cases is the categorical cross-entropy better than the mean squared error?

In my code, I usually use the mean squared error (MSE), but the TensorFlow tutorials always use the categorical cross-entropy (CCE). Is the CCE loss function better than MSE? Or is it better only in certain cases?

As a rule of thumb, mean squared error (MSE) is more appropriate for regression problems, that is, problems where the output is a numerical value (i.e. a floating-point number or, in general, a real number). However, in principle, you can use the MSE for classification problems too (even though that may not be a good idea). MSE can be preceded by the sigmoid function, which outputs a number $p \in [0, 1]$, which can be interpreted as the probability of the input belonging to one of the classes, so the probability of the input belonging to the other class is $1 - p$.

Similarly, cross-entropy (CE) is mainly used for classification problems, that is, problems where the output can belong to one of a discrete set of classes. The CE loss function is usually separately implemented for binary and multi-class classification problems. In the first case, it is called the binary cross-entropy (BCE), and, in the second case, it is called categorical cross-entropy (CCE). The CE requires its inputs to be distributions, so the CCE is usually preceded by a softmax function (so that the resulting vector represents a probability distribution), while the BCE is usually preceded by a sigmoid.

In a classification problem it's better to get higher error and higher error slope when we predict the label wrong.

As you see in the graph by using cross-entropy you get high error when the algorithm predict a label wrong and small error when the prediacted label is close enough, so it helps us to separate the predicted classes better. 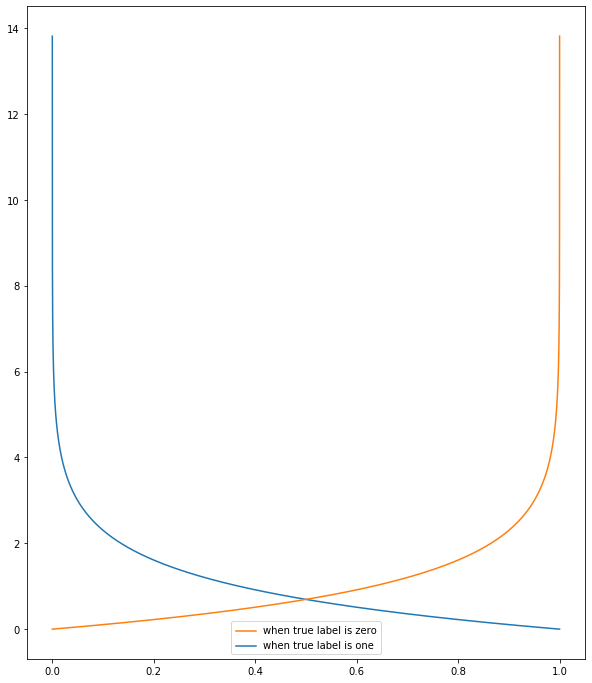 Not the answer you're looking for? Browse other questions tagged machine-learning comparison loss-functions mean-squared-error categorical-crossentropy or ask your own question.

4
Why is the hyperbolic tangent with MSE better than the sigmoid with cross-entropy?
6
Cross entropy loss function causes division by zero error
5
Can the mean squared error be negative?
4
Why does the binary cross-entropy work better than categorical cross-entropy in a multi-class single label problem?
2
What does it mean if classification error is equal between two networks but the MSE is different?
2
Why do we calculate the mean squared error loss to improve the value approximation in Advantage Actor-Critic Algorithm?