In the Markov chain, how are the directions to each successive state defined?

I'm watching the David Silver series on YT which has raised a couple of questions:

In the Markov process (or chain), how are the directions to each successive state defined? For example, how are the arrow directions defined for the MP below? What's stopping our sample episodes from choosing A -> C -> D -> F? 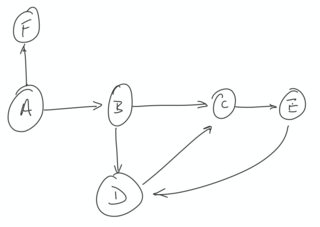 Also, how is the probability transition matrix populated? From David's example, the probabilities seem to have already been set. For example: 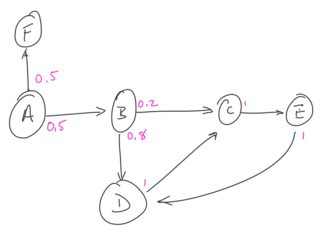 As DuttaA says in his comment, you can imagine that all nodes are linked with all other nodes, but those links have a transition probability of 0.0; so the probability of observing the sequence ACDF is actually 0.0 as well. In order to make the diagram more easy to understand, zero-probability transitions are generally not shown.

Re updating: this depends on the application. If you are modelling a process with known probabilities, you would not update the probabilities; if you are modelling a dynamic process which changes over time, then this is something you might want to consider. However, from my own experience (HMMs in speech recognition), once they have been assigned, they are generally kept as they are.

A Markov chain is really a fairly basic model; it gets more complex with a Hidden Markov Model, where you would generally use a learning algorithm to assign the transition and emission probabilities.

Not the answer you're looking for? Browse other questions tagged machine-learning reinforcement-learning markov-chain or ask your own question.

1
How is the probability transition matrix populated in the Markov process (chain) for a board game?

7
What is a Markov chain and how can it be used in creating artificial intelligence?
6
How to implement exploration function and learning rate in Q Learning
3
Confusion about temporal difference learning
1
How is the probability transition matrix populated in the Markov process (chain) for a board game?
0
Is it required that taking an action updates the state?
6
What is the difference between a Bayesian Network and a Markov Chain?
4
How are afterstate value functions mathematically defined?