Can neurons in MLP and filters in CNN be compared?

I know they are not the same in working, but an input layer sends the input to $n$ neurons with a set of weights, based on these weights and the activation layer, it produces an output that can be fed to the next layer.

tl;dr The equivalent to a neuron in a Fully-Connected (FC) layer is the kernel (or filter) of a Convolution layer

The neurons of these two types of layers have two key differences. These are that the convolution layers implement:

Besides these two key differences, there are some other technical details, e.g. how the biases are implemented. Other than that they perform the same operation.

On the left are two FC neural networks. On the right, are layers with sparse connections.

On the left is a sparsely connected network. The colors represent the different values of the weights. On the right is the same network with weight-sharing. Note that similar weights (i.e. arrows with the same direction in each layer) have the same value.

To answer your other questions:

Are filters not the same in the way that they convert an "image" to a new "image" based on the weights that are in that filter? And that the next layers use these new "images"?

Yes, if the input of a convolution layer is an image, so will the output. The next layer will also operate on an image.

However, I'd like to note that not all convolution layers accept images as their inputs. There are 1D and 3D convolutional layers as well.

The other answer gives a good overview of the differences between MLPs and CNNs, and it includes 2 diagrams that attempt to illustrate the main differences between MLPs and CNNs, i.e. sparse connectivity and weight sharing. However, these diagrams do not clarify what a neuron in a CNN could be. A better diagram, which illustrates what a neuron is in a CNN, from a CNN and MLP perspective, is the following (taken from the famous article on CNNs). 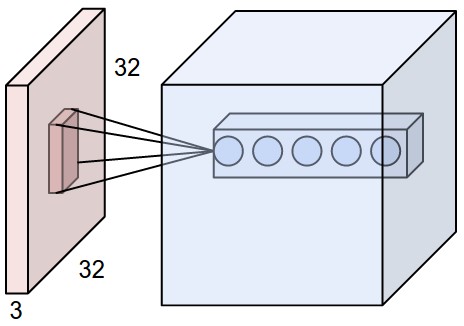 Here, there are 2 main blocks (aka volumes): the orange block on the left (the input) and the blue/cyan volume on the right (the feature maps, i.e. the outputs of the convolutional layer, i.e. after the application of the convolutions with different kernels).

The circles in the visible stack of the cyan block represent the neurons (or, more precisely, their activations or outputs). We only see $k=5$ neurons stacked: this corresponds to the application of $k=5$ different kernels (i.e. weights) to that specific subset of the input (aka receptive field), hence the sparse connectivity of CNNs. So, these neurons, in the same stack, are looking at the same small subset of the input, but with different weights (i.e. kernels). The neurons, which are not shown in this diagram, that are on the same (vertical) 2d plane (known as feature map) of the same neuron (e.g. the first that we see from left to right) in the cyan volume are the neurons that share the same weights, i.e. we use the same kernel to produce their outputs.

Some authors prefer to use the term convolutional networks, i.e. without the term neural, probably because of this issue, i.e. it's not clear, especially to newcomers, what a neuron would be in a CNN, so the neuroscientific/biological view of CNNs is not always clear, although it's important to emphasize that CNNs were inspired by the visual cortext, so this biological interpretation could (and should) be more widely known or less confusing/misunderstood.

The filters in a CNN correspond to the weights of an MLP.

A neuron in a CNN can be viewed as performing exactly the same operation as a neuron in an MLP. The big differences between a CNN and an MLP (as explained also in the other answer) are

Not the answer you're looking for? Browse other questions tagged convolutional-neural-networks multilayer-perceptrons artificial-neuron weights filters or ask your own question.

12
What is the difference between a receptive field and a feature map?
4
Are convolutional neural networks inspired by the human brain?
3
Why might the convolution be inappropriate when the task involves incorporating information from very distant locations in the input?
1
What are acting as weights in a convolution neural network?
1
If I wanted to calculate multiple feature maps in a convolutional layer, should the filters be trained individually?
0
How many layers and neurons in a FFNN do I need to make it equivalent to a CNN?

57
In a CNN, does each new filter have different weights for each input channel, or are the same weights of each filter used across input channels?
3
Can I reduce the "number of weights" in CNN to 1/3 by restricting the input as greyscale image?
0
Huge variations in epoch count for highest generalized accuracy in CNN
4
How are filters weights updated for a CNN?
4
Do all filters of the same convolutional layer need to have the same dimensions and stride?
2
What is the need for so many filters in a CNN?
0
Is "kernel" different from "filter" in convolutional neural networks?
0
What, exactly, do mlp(64,64) and mlp(64,128,1024) mean in PointNet, and how many input neurons does 1 (x,y,z) point have?