Is ReLU a non-linear activation function?

The sigmoid is typically used as an activation function of a unit of a neural network in order to introduce non-linearity. 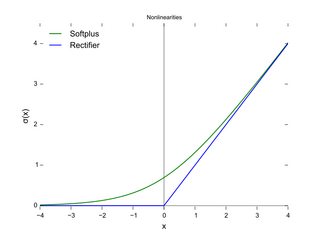 if you see the image from wikipedia, it shown that ReLU (the blue line) is non-Linear (the line is not straight, it turns in 0). You can also check "visual" definition of linear function in wikipedia:

"In calculus and related areas, a linear function is a function whose graph is a straight line"

Linear function of one variable can be defined as:

If you plot that function in 2D, it will give you a straight line. Then, the form of linear function with multi variables:

If you again plot that function in the correct dimension it also give you a straight line. And if you that function carefully, it similar with calculation that happen in a neuron. That's why neuron addition and multiplication is a linear function:

as the neural network is trained to find the value of $a,b,c,d$, we can group the constant from the formula above, and then rewrite to:

with $m=ca$ and $n=cb+d$. So without non-linear function the layer of neural network is useless, it only give you another "simple" linear function

ReLU formula is a $f(x)=max(0,x)$, it produces non-linearity as you can't write to linear function format. Using this function will give you "complexity" when you add more layer on top of it.

ReLU is non-linear by definition

In calculus and related areas, a linear function is a function whose graph is a straight line, that is a polynomial function of degree one or zero.

But this is still non-linear on the entire domain:

Not the answer you're looking for? Browse other questions tagged neural-networks deep-learning math activation-functions relu .