DeepMind just published a paper about a differentiable neural computer, which basically combines a neural network with a memory.

The idea is to teach the neural network to create and recall useful explicit memories for a certain task. This complements the abilities of a neural network well, because NNs only store knowledge implicitly in the weights and the information used to work on a single task is only stored in the activation of the network and degrades quickly the more information you add. (LSTMs are one try to slow down this degradation of short term memories, but it still happens.)

Why would this approach scale? Shouldn't a somewhat higher number of task-specific information once again overwhelm the network's capability of keeping the addresses of all the appropriate memory slots in its activation?

Examining the architecture of the DNC indeed shows many similarities to the LSTM. Consider the diagram in the DeepMind article that you linked to:

Compare this to the LSTM architecture (credit to ananth on SlideShare): 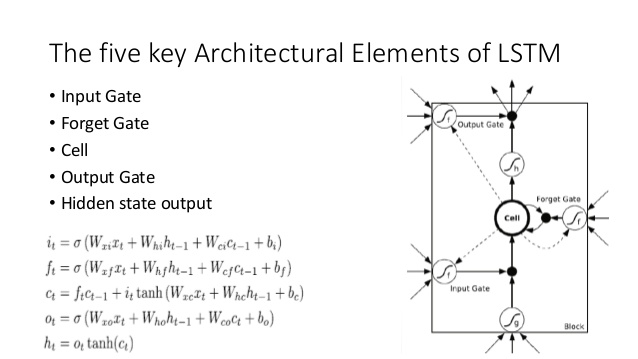 There are some close analogs here:

However, the DNC is definitely more than an LSTM. Most obviously, it utilizes a larger state which is discretized (addressable) into chunks; this allows it to make the forget gate of the LSTM more binary. By this I mean that the state is not necessarily eroded by some fraction at every time step, whereas in the LSTM (with the sigmoid activation function) it necessarily is. This might reduce the problem of catastrophic forgetting that you mentioned and thus scale better.

The DNC is also novel in the links that it uses between memory. However, this might be a more marginal improvement on the LSTM than it seems if we re-imagine the LSTM with complete neural networks for each gate instead of just a single layer with an activation function (call this a super-LSTM); in this case, we can actually learn any relationship between two slots in memory with a sufficiently powerful network. While I don't know the specifics of the links that DeepMind is suggesting, they imply in the article that they are learning everything just by backpropagating gradients like a regular neural network. Therefore whatever relationship they are encoding in their links should theoretically be learnable by a neural network, and so a sufficiently powerful 'super-LSTM' should be able to capture it.

With all that being said, it is often the case in deep learning that two models with the same theoretical capability for expressiveness perform vastly different in practice. For example, consider that a recurrent network can be represented as a huge feed-forward network if we just unroll it. Similarly, the convolutional network isn't better than a vanilla neural network because it has some extra capacity for expressiveness; in fact, it is the constraints imposed on its weights that makes it more effective. Thus comparing the expressiveness of two models isn't necessarily a fair comparison of their performance in practice, nor an accurate projection of how well they will scale.

One question I have about the DNC is what happens when it runs out of memory. When a classical computer runs out of memory and another block of memory is requested, programs start crashing (at best). I'm curious to see how DeepMind plans to address this. I assume it will rely on some intelligent cannibalization of memory currently in use. In some sense computers currently do this when an OS requests that applications free up non-critical memory if memory pressure reaches a certain threshold.

Not the answer you're looking for? Browse other questions tagged deep-learning papers scalability neural-turing-machine differentiable-neural-computer or ask your own question.

2
How does deepmind's Atari game AI work?
5
How would AI be able to self-examine?
6
Are there human predictions of when a computer would have been better than a human at Go?
2
Extending a neural network to classify new objects
1
Why are denser layers needed in computer vision neural nets?