How to measure sample efficiency of a reinforcement learning algorithm?

First of all, let's recall some definitions.

A sample in the context of (deep) RL is a tuple $(s_t, a_t, r_t, s_{t+1})$ representing the information associated with a single interaction with the environment.

As for sample efficiency, it is defined as follows [1]:

Sample efficiency refers to the amount of data required for a learning system to attain any chosen target level of performance.

So, how you measure it is closely related to the way it is defined.

For example, one way to do it would be as shown in the figure below:

So, you can measure sample efficiency at the intersection, where you get the number of samples needed to reach the performance baseline. So, an algorithm that requires less samples would be more sample-efficient. 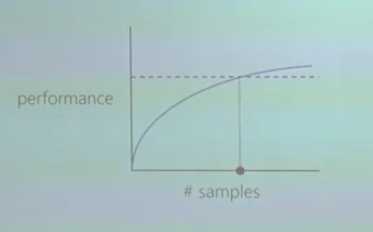 Another way to do it would be the other way around, i.e. the RL agent is provided with a limited budget for the number of samples it could take. As a result, you can measure sample efficiency my measuring the area under the curve, as illustrated below. So, that would be how much performance you got just by using those samples in the budget. An algorithm that achieves a higher performance than another with the same amount of samples would then be more sample efficient. 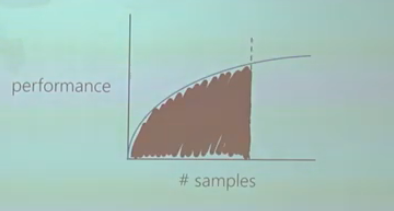 I am not aware if there exist RL libraries that would provide you with this measure out-of-the-box. However, if you're using Python for example, I believe that using libraries like scipy or scikit-learn along with matplotlib could do the job.

Not the answer you're looking for? Browse other questions tagged reinforcement-learning sample-efficiency or ask your own question.