In the proof of the policy gradient theorem in the RL book of Sutton and Barto (that I shamelessly paste here): 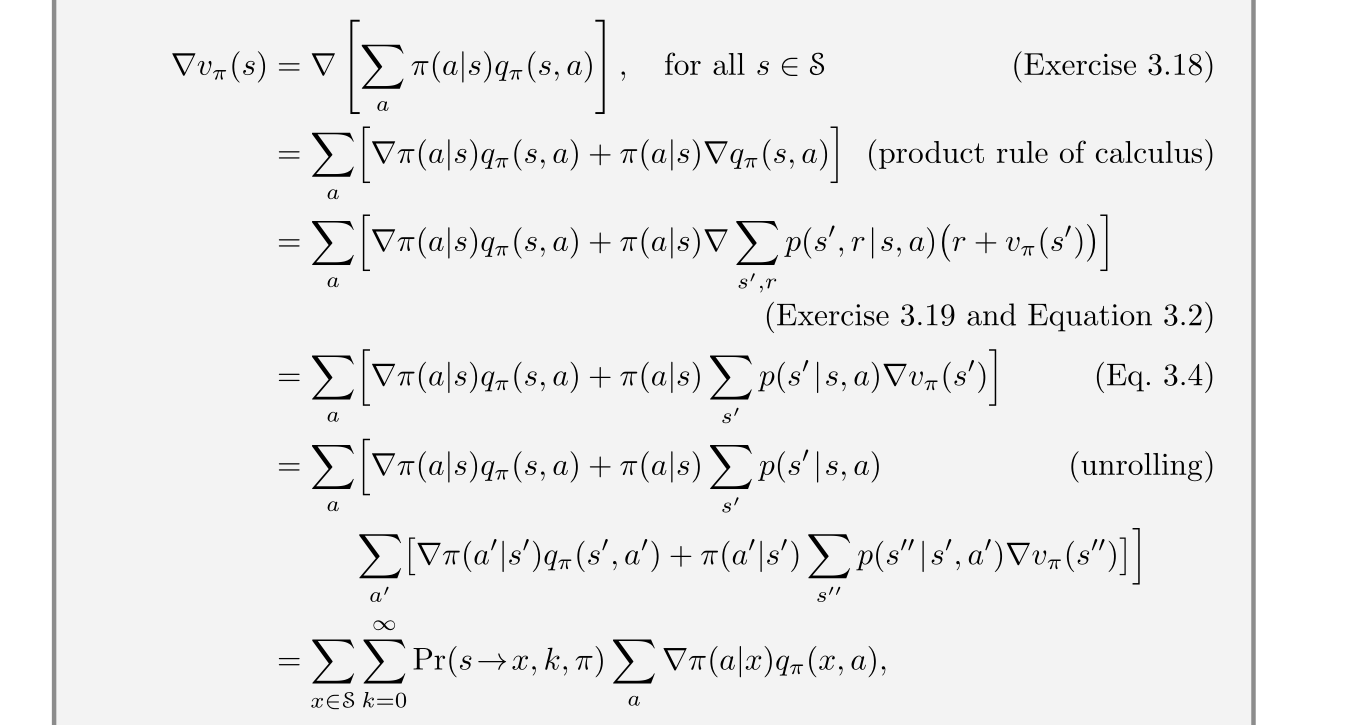 Well, it's not. :) Can someone explain this step in more detail?

The unrolling step is due to the fact you end up with an equation that you can keep expanding indefinitely.

We need the term $\sum_{x \in \mathcal{S}} \sum_{k=0}^\infty \mathbb{P}(s\rightarrow x, k, \pi)$ because we want to take an average over the state space, however due to unrolling there are many different $s_t$'s that we need to average over (this comes from the $s',s'',s''',...$ in the unrolling) so we also need to add the probability state of transitioning from state $s$ to $x$ in $k$ time steps, where we sum over an infinite horizon due to the repeated unrolling.

If you are wondering what happens to the terms $\pi(a|s)$ and $p(s'|s,a)$ terms and why they are not explicitly shown in this final form, it is because this is exactly what the $\mathbb{P}(s\rightarrow x, k, \pi)$ represents. The average over all possible states accounts for the $p(s'|s,a)$ and the fact that we follow policy $\pi$ in the probability statement accounts for the $\pi(a|s)$.

It looks like "v of s prime" is just substituted with the already derived value for "v of s". You can call it a recursion of a kind. In other words, v(s) is dependent on v(s') and that implies that v(s') is dependent on v(s''). So we can combine that and get the dependency of v(s) of v(s'').

Not the answer you're looking for? Browse other questions tagged reinforcement-learning policy-gradients or ask your own question.

1
Understanding why the expectation is over the new policy $\pi'$ in the proof of the Policy Improvement Theorem
6
Why is the n-step tree backup algorithm an off-policy algorithm?
3
What does it mean to parameterise a policy in policy gradient methods?
6
Is this proof of $\epsilon$-greedy policy improvement correct?
5
Comparing the derivation of the Deterministic Policy Gradient Theorem with the standard Policy Gradient Theorem
2
Why are state-values alone not sufficient in determining a policy (without a model)?
1
How do we get from conditional expectation on both state and action to only state in the proof of the Policy Improvement Theorem?
0
Policies for which the policy improvement theorem holds