I am a bit confused as to how exactly I should be implementing SARSA (or Q-learning too) on what is a simple 2-stage Markov Decision Task. The structure of the task is as follows: 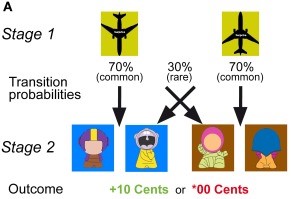 One on hand, it seems to me that since this is the end of an episode, we assign $0$ to the $Q_t(\cdot,\cdot).$ On the other hand, the nature of this task is that it repeats the same episode over time for a total of $T$, a large number, times we need $Q_t(\cdot,\cdot) = Q_t(S_1,\cdot),$ with the additional action-selection in the first stage there.

I will greatly appreciate if someone can tell me what is the right way to go here.

The link to paper

In this game you can view end of an episode two ways:

The first, terminating, view is a simpler and entirely natural view since nothing that the agent does in one episode can influence the next. It will result in a Q table that predicts future rewards within a single episode for the current agent (as opposed to discounted view over multiple episodes).

You are over-complicating things for yourself by ignoring that a zero reward is still a reward (of $0$). There is no need to remove $R$ from your initial update rule. In many environments there are rewards collected before the end of an episode.

In addition, to complete the standard episodic view, you can note that $Q(s_4, \cdot) = 0$ always by definition, hence so does $\text{max}_{a'}[Q(s_4, a'] = 0$. It is common here though to have a branch based on detecting a terminal state, and use a different update rule:

In brief, most implementations of TD algorithms do this:

When implementing the environment, it is common to have a step function that always returns reward, next state and whether or not it is terminal e.g.

Details may vary around this. If you are working with an environment that does not have such a function (many will not have an inherent reward), then it is common to implement a similar function as a convenient wrapper to the environment so that the agent code does not have to include calculations of what the reward should be or whether the state is terminal.

Not the answer you're looking for? Browse other questions tagged reinforcement-learning q-learning markov-decision-process sarsa .

5
How do we compute the target value when the agent ends up in the terminal state?
2
Equivalence between expected parameter increments in "Off-Policy Temporal-Difference Learning with Function Approximation"
3
What is the value of a state when there is a certain probability that agent will die after each step?
5
Given two optimal policies, is an affine combination of them also optimal?
1
Sutton and Barto 2nd Edition Exercise 13.1
1
What is meant by "two action selections" in SARSA?