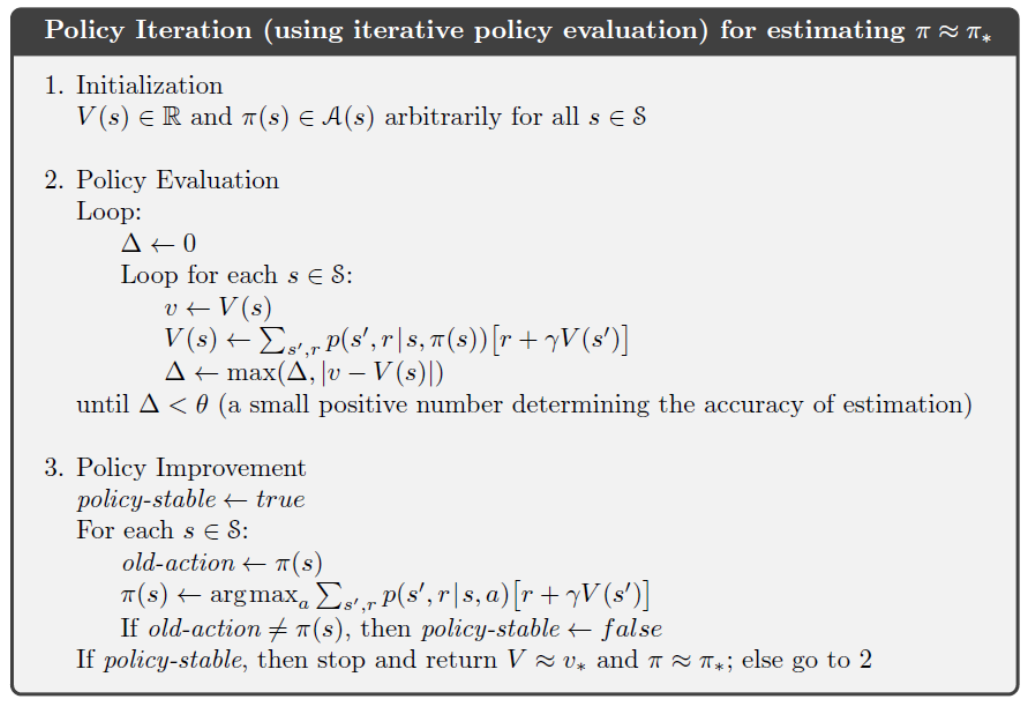 Above is the algorithm for Policy Iteration from Sutton's RL book. So, step 2 actually looks like value iteration, and then, at step 3 (policy improvement), if the policy isn't stable it goes back to step 2.

I don't really understand this: it seems like, if you do step 2 to within a small $\Delta$, then your estimate of the value function should be pretty close to optimal for each state.

So, why would you need to visit it again after policy improvement?

It seems like policy improvement only improves the policy function, but that doesn't affect the value function, so I'm not sure why you'd need to go back to step 2 if the policy isn't stable.

Value functions are always specific to some policy, which is why you will often see the subscript $\pi$ in e.g. $v_{\pi}(s)$ when there is a defined policy.

The policy evaluation step (step 2) in policy iteration converges to an accurate value function estimate for whatever the current policy is. In general this will not be an optimal value function, except on the last time that step 2 is used, and there is no change to the policy in the next stage policy improvement (step 3).

6
Why is the n-step tree backup algorithm an off-policy algorithm?
2
Possible inconsistency in the Policy Improvement equation
4
Understanding the update rule for the policy in the policy iteration algorithm
3
Why is my implementation of Q-learning not converging to the right values in the FrozenLake environment?
6
What is the proof that policy evaluation converges to the optimal solution?
2
Why do I need an initial arbitrary policy to implement value iteration algorithm
2
Why are state-values alone not sufficient in determining a policy (without a model)?