What exactly are genetic algorithms and what sort of problems are they good for?

I've noticed that a few questions on this site mention genetic algorithms and it made me realize that I don't really know much about those.

I have heard the term before, but it's not something I've ever used, so I don't have much idea about how they work and what they are good for. All I know is that they involve some sort of evolution and randomly changing values.

Can you give me a short explanation, preferably including some sort of practical example that illustrates the basic principles?

Evolutionary algorithms are a family of optimization algorithms based on the principle of Darwinian natural selection. As part of natural selection, a given environment has a population of individuals that compete for survival and reproduction. The ability of each individual to achieve these goals determines their chance to have children, in other words, to pass on their genes to the next generation of individuals, who, for genetic reasons, will have an increased chance of doing well, even better, in realizing these two objectives.

An individual is coded as a genotype, which can have any shape, such as a bit vector (genetic algorithms) or a vector of real (evolution strategies). Each genotype is transformed into a phenotype when assessing the individual, i.e. when its fitness is calculated. In some cases, the phenotype is identical to the genotype: it is called direct coding. Otherwise, the coding is called indirect. For example, suppose you want to optimize the size of a rectangular parallelepiped defined by its length, height and width. To simplify the example, assume that these three quantities are integers between 0 and 15. We can then describe each of them using a 4-bit binary number. An example of a potential solution may be to genotype 0001 0111 1010. The corresponding phenotype is a parallelepiped of length 1, height 7 and width 10.

Evolutionary algorithms have proven themselves in various fields such as operations research, robotics, biology, nuance, or cryptography. In addition, they can optimize multiple objectives simultaneously and can be used as black boxes because they do not assume any properties in the mathematical model to optimize. Their only real limitation is the computational complexity. 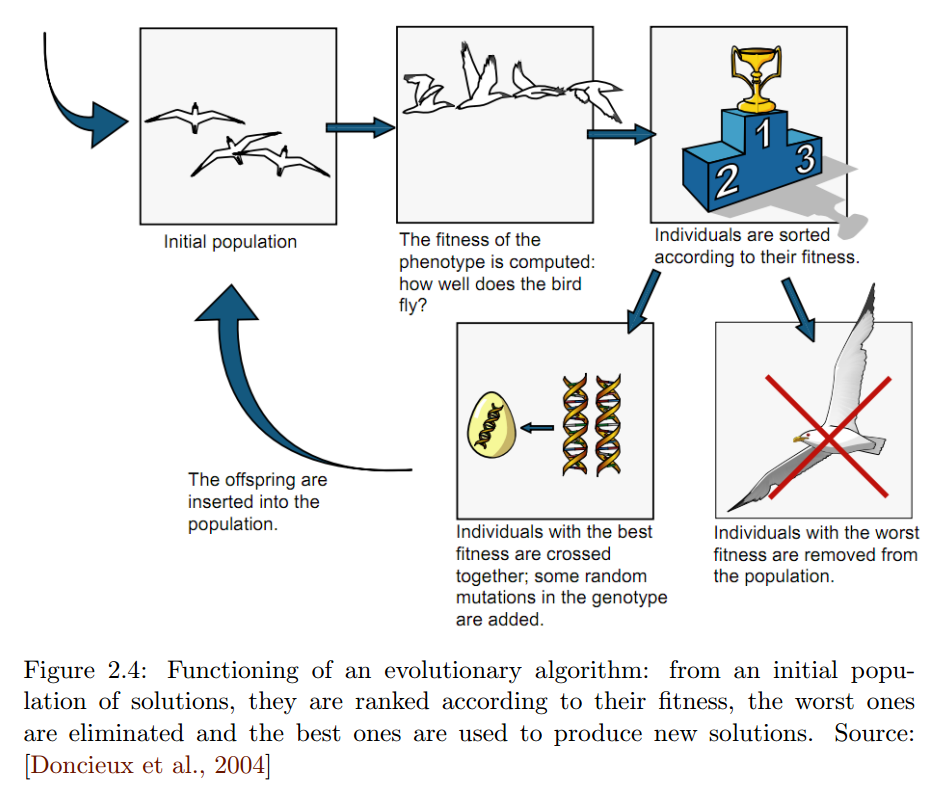 The idea is that, over time, an attempted solution emerges that has a high enough fitness value to solve the problem.

The inspiration for this came from the theory of evolution; the fittest solutions survive and procreate.

Suppose you were looking for the most efficient way to cut a number of shapes out of a piece of wood. You want to waste as little wood as possible.

There are a number of good answers here explaining what genetic algorithms are, and giving example applications. I'm adding some general purpose advice on what they are good for, but also cases where you should NOT use them.

If my tone seems harsh, it is because using GAs in any of the cases in the inappropriate section below will lead to your paper being instantly rejected from any top-tier journal.

First, your problem MUST be an optimization problem. You need to define a "fitness function" that you are trying to optimize and you need to have a way to measure it.

Finally, if you are considering a GA, consider more recent work in Evolutionary Strategies. I am biased towards CMA-ES, which I think is a good simple algorithm that captures the notion of a gradient in the fitness landscape in a way that traditional GAs do not.

This answer requests a practical example of how one might be used, which I will attempt to provide in addition to the other answers. They seem to due a very good job of explaining what a genetic algorithm is. So, this will give an example.

Let's say you have a neural network (although they are not the only application of it), which, from some given inputs, will yield some outputs. A genetic algorithm can create a population of these, and by seeing which output is the best, breed and kill off members of the population. Eventually, this should optimise the neural network if it is complicated enough.

Here is a demonstration I've made, which despite being badly coded, might help you understand. http://khrabanas.github.io/projects/evo/evo.html Hit the evolve button and mess around with the goals.

It uses a simple genetic algorithm to breed, mutate, and decide which individuals of the population survive. Depending on how the input variables are set, the network will be able to get to some level of closeness to them. In this fashion, the population will likely eventually become a homogeneous group, whose outputs resemble the goals.

The genetic algorithm is trying to create a "neural network" of sorts, that by taking in RGB, will yield an output color. First, it generates a random population. It then by taking 3 random members from the population, selecting the one with the lowest fitness and removing it from the population. The fitness is equal to the difference in the top goal squared + the difference in the bottom goal squared. It then breeds the two remaining ones together and adds the child to the same place in the population as the dead member. When mating occurs, there is a chance a mutation will occur. This mutation will change one of the values randomly.

As a side note, due to how it is set up, it is impossible for it to be totally correct in many cases, though it will reach relative closeness.

As observed in another answer, all you need to apply Genetic Algorithms (GAs) is to represent a potential solution to your problem in a form that is subject to crossover and mutation. Ideally, the fitness function will provide some kind of smooth feedback about the quality of a solution, rather than simply being a 'Needle in a Haystack'.

Here are some characteristics of problems that Genetic Algorithms (and indeed Metaheuristics in general) are good for:

However, despite their widespread use for the purpose, note that GAs are actually not function optimizers - GA mechanisms tend not to explore 'outlying' regions of the search space in the hope of finding some distant high quality solution, but rather to cluster around more easily attainable peaks in the 'fitness landscape'.

More detail on the applicability of GAs is given in a famous early paper "What makes a problem hard for a Genetic Algorithm?"

Not the answer you're looking for? Browse other questions tagged genetic-algorithms applications evolutionary-algorithms or ask your own question.

16
How does novelty search work?
7
What kinds of problems can AI solve without using a deep neural network?
5
When do mutations in NEAT occur?