I want to build HELM neural network that consists of autoencoder (AE) and one class classification (OC).

HELM with AE and OC have following shape: 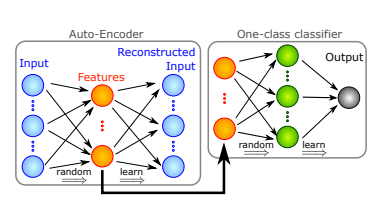 That is, hidden layer output of AE is input of OC.

Training of HELM consists of training AE and OC separately. In order to train each neural network in HELM, first there are generated random weights and biases between input and hidden layers, and then based of them and activation function (for example sigmoid), only weights between hidden and output layers are trained. But then what's the point in training weights between hidden and output layers in AE, since only output of its hidden layer is provided as input into one-class classifier? What is point in use AE in HELM if weights between input and hidden layers of AE are basicaly random?

confirms that output of hidden layer of AE is input for OC, but also on the contrary in Algorithms 2 and 3 (pages 6, 7), there is shown that input of OC is AE input vector multiplied by matrix of weights between hidden and output layer, what sounds weird for me.

Browse other questions tagged classification training autoencoders or ask your own question.

6
Is it better to make neural network to have hierchical output?
3
What is the best XOR neural network configuration out there in terms of low error?
5
What should the range of the output layer be when performing classification?
3
Which online machine learning technique to use for multi-class classification problem with multiple inputs?
1
What class of problem is this?
3
Can some of the weights be fixed during the training of a neural network?
2
Should I continue training if the neural network attains 100% training accuracy?