Why are shallow networks so prevalent in RL?

In deep learning, using more layers in a neural network adds the capacity to capture more features. In most RL papers, their experiments use a 2 layer neural network. Learning to Reset, Constrained Policy Optimization, Model-based RL with stability guarantees just to name a few - these are papers I personally remember but there are definitely many others.

I came across this question whose answers generally agree that yes, RL using a shallow network is considered deep RL, but the reason for preference of shallow networks was not part of the question.

In MetaMimic (2018), the authors trained the largest neural net RL algorithm at the time (a residual net with 20 convolution layers) for one-shot imitation learning. The paper demonstrates that larger networks as policy approximators generalize better and represent many behaviours.

So, why are shallow 2 layer networks so widely used?

Simple policy parametizations, including linear functions in some cases, can solve continous control tasks in RL. It's therefore not necessary to have a complex approximator for the function to be expressive enough in capturing the desired agent's behaviour in popular RL benchmarks

Towards Generalization and Simplicity in Continous Control tries to answer the question "What are the simplest set of ingredients needed to succeed in some of the popular benchmarks?"

Among them is the representation capacity required of the function approximators.

I assume RBF, and its use of Conjugate Gradients, has some shortcomings which make shallow Neural networks more preferrable. (I'm not familiar with RBF, and stand to be corrected).

Overall, the the authors use these result to suggest that complex policy architectures should not be a default choice in RL unless side-by-side comparisons with simpler alternatives suggest otherwise.

This might explain the prevalence of shallow networks. It's also possible that since most RL research (presently) doesn't try to show how we can learn better representations using complex policy architectures, but rather how to better make use of representation capacities by addressing issues like sample efficiency, shallow networks are expressive enough in the adapted benchmarks. As expressed in Brail's comment, this is also useful for setting up fair comparisons.

However, the effect of network architecture design in RL has not been widely pursued.

It's also worth mentioning the findings of this work D2RL, (2020) which shows one can gain significant performance improvement by using input concatenations in the policy and value function, and that more layers in a vanilla neural net decreases the agent performance. 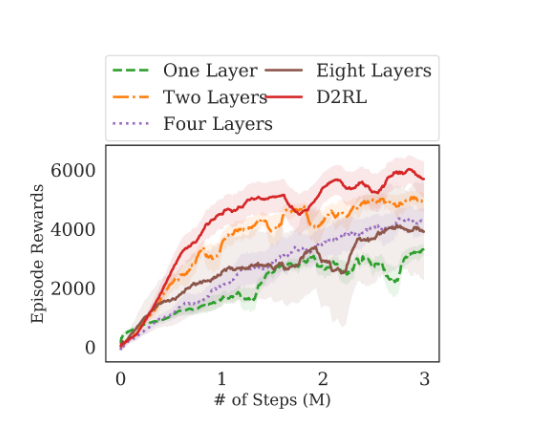 The effect of increasing the number of FCs in SAC. Performance drops after 2 layers (D2RL)

Not the answer you're looking for? Browse other questions tagged neural-networks reinforcement-learning deep-learning deep-rl or ask your own question.

3
Why are neural networks always trained "by themselves"?
15
Why does DQN require two different networks?
8
How can a neural network approximate all functions when the weights are not allowed to grow exponentially?
1
How to create Partially Connected NNs with prespecified connections using Tensorflow?
8
Is reinforcement learning using shallow neural networks still deep reinforcement learning?
6
Why don't people use projected Bellman error with deep neural networks?
0
Why are we using all hyperparameters in RL?
1
Why are Target Networks used in Deep Q-Learning as opposed to the Expected Value equation?