I am trying to set up a neural network architecture that is able to learn the points of one function (blue curves) from the points of an other one (red curves). I think that it could be somehow similar to the problem of learning a functional like it was described in this question here. I don't know at all what this (let's call it) functional looks like, I just see the 'blue' response of it to the 'red' input. 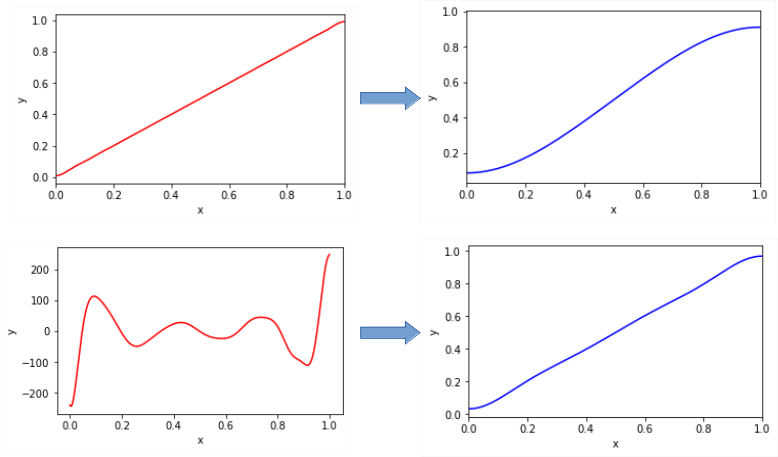 The inputs of the network would be the (e.g. 100) points of a red curve and the outputs would probably be the (e.g. 50) points of the blue curve. This is where my problem begins. It tried to implement a simple dense network with two hidden layers and around 200-300 neurons each. Obviously it didn't learn much.

I have the feeling that I somehow need to tell the network that the points next to each other (e.g. input points $x_0$ and $x_1$) are correlated and the function they belong to is differentiable. For the inputs this could be archieved by using convolutional layers, I suppose. But I don't really now how to specify, that the output nodes are correlated with each other as well.

At the beginning I had high hopes in the approach using Generalized Regression Neural Networks as presented here, where a lowpass filter is implemented with NNs. However, as I understood, only the filter coefficients are predicted. As I don't know anything about the general structure of my functional, this will not help me here ...

Do you have any other suggestions for NN architectures that could be helpful for this problem? Any hint is appreciated, thank you!

Browse other questions tagged neural-networks regression function-approximation or ask your own question.

10
How to transform inputs and extract useful outputs in a Neural Network?
4
Does the neural network calculate different relations between inputs automatically?
6
Convolutional Neural Network: does each filter in each convolution layer create a new image?
1
How to train a neural network with few weights and biases held constant?
0
Why my Fully Connected Neural Network outputs the same prediction?
0
How to explain that a same DNN model have radically different behaviours with each new initialization and training?