How to perform data augmentation on multiple input classification task?

I would like to add some more samples to my dataset which consists of two parts: 1. image and 2. numerical data. For each image in the dataset there is its corresponding numerical data as well. If it were to image only classification, I would have used cropping augmentation method (others wouldn't not suit the dataset). However, it is now a multiple input to one output (binary classification) task, I'm struggling to come up with a better solution.

Could someone name some of the techniques I can apply to such a type of classification?

One example I can think of is this. Since I can't apply other augmentation methods except cropping, I may increase one sample of data by cropping the center, left and right parts (by preserving ~90% of original image).

(cat image and its numerical data were made up for explanation)

If this type of image augmentation is still sensible, I would just broadcast the same number of numerical samples (namely, 3 times) as one image's numerical data. 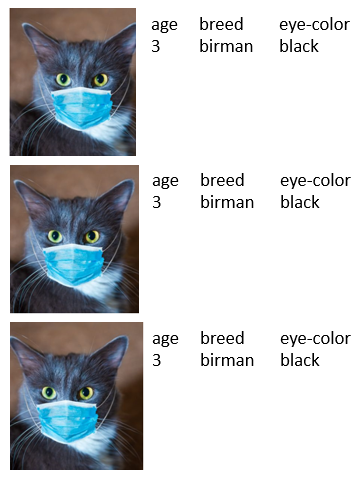 What do you think of this way of data augmentation?

5
Using crowdsourcing for deep learning
1
Comments on my proposed “Jitter” neuron
4
How would you encode your input vector/matrix from a sequence of moves in game like tasks to train an AI? e.g. Chess AI?
2
How to label edited images after data augmentation?
1
How to fairly conduct a model performance with 5-fold cross validation after augmentation?
1
How can I merge outputs of two separate layers so that the overall performance improves?
3
How can I detect the frame from video streaming that contains a graffiti on city wall?
1
CNN High Variance across multiple trained models, what does it mean?
2
Can ML/DL solve my classification problem?
1
What is the difference between feature extraction with or without data augmentation?