Can I start with perfect discriminator in GAN?

In many implementations/tutorials of GANs that I've seen so far (e.g. this), the generator and discriminator start with no prior knowledge. They continuously improve their performance with training. This makes me wonder — is it possible to use a pre-trained discriminator? I have two motivations for doing so:

Would the generator be able to learn just the same, or is it dependent on the fact that they start from scratch?

If you start with perpect discriminator, loss function will be saturated, and gradient of loss will be very small, so feedback for the generator also will be small, and learning will be slow down as a result. Actually, it is allways desired for discriminator and generator to learn balancedly. Additionally, it is claimed that Wasserstein Loss take care of this problem.

You can find more information in this article. (I strongly suggest to read)

Also from the paper " Towards principled methods for training generative adversarial networks":

In theory, one would expect therefore that we would first train the discriminator as close as we can to optimality (so the cost function on $\theta$ better approximates the JSD), and then do gradient steps on $\theta$, alternating these two things. However, this doesn’t work. In practice, as the discriminator gets better, the updates to the generator get consistently worse. The original GAN paper argued that this issue arose from saturation, and switched to another similar cost function that doesn’t have this problem. However, even with this new cost function, updates tend to get worse and optimization gets massively unstable.

Note 1: $\theta$ is parameters of generator

Also from the paper of Wasserstein Loss:

The fact that the EM distance is continuous and differentiable a.e. means that we can (and should) train the critic till optimality. The argument is simple, the more we train the critic, the more reliable gradient of the Wasserstein we get, which is actually useful by the fact that Wasserstein is differentiable almost everywhere. For the JS, as the discriminator gets better the gradients get more reliable but the true gradient is 0 since the JS is locally saturated and we get vanishing gradients ... In Figure 2 we show a proof of concept of this, where we train a GAN discriminator and a WGAN critic till optimality. The discriminator learns very quickly to distinguish between fake and real, and as expected provides no reliable gradient information. The critic, however, can’t saturate, and converges to a linear function that gives remarkably clean gradients everywhere. 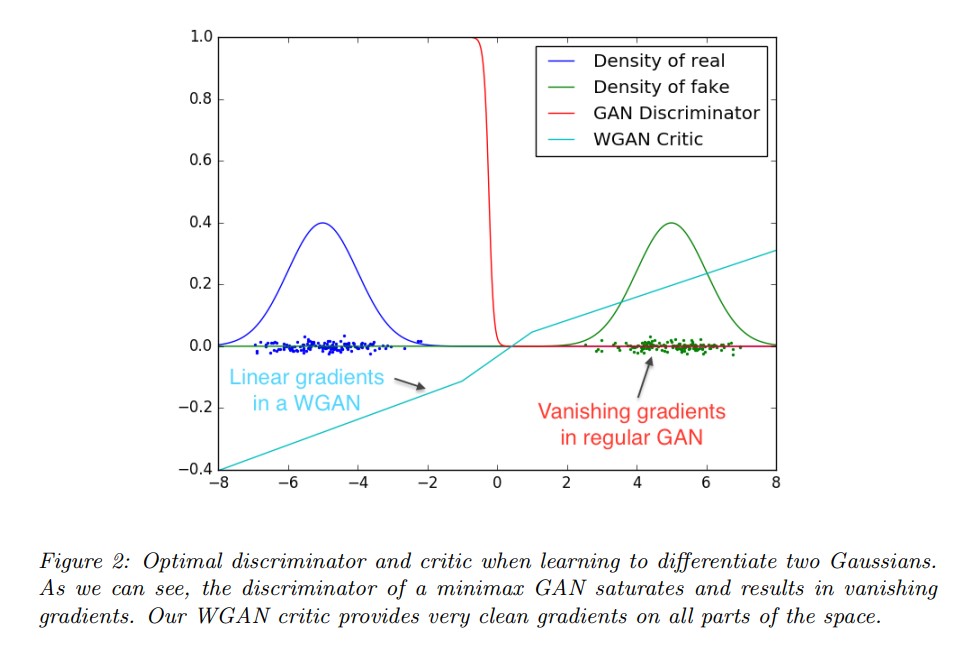 Not the answer you're looking for? Browse other questions tagged convolutional-neural-networks generative-adversarial-networks or ask your own question.

2
Why do we need Upsampling and Downsampling in Progressive Growing of Gans
2
How can I use Generative Adversarial Networks to solve the imbalanced class problem?
4
Using GAN's to generate dataset for CNN training
3
Why use the output of the generator to train the discriminator in a GAN?
3
What parameters can be tweaked to avoid a generator or discriminator loss collapsing to zero when training a DC-GAN?
1
Explain the difference in graphical patterns between discriminator fake loss and generator loss in GAN
1
Optimum Discriminator for label smoothed GAN