I want to do alpha-beta pruning on this tree:

I couldn't understand your question clearly, however, it think you are making a slim mistake. let's look at the flowing code from "Russell " and do pruning step by step: 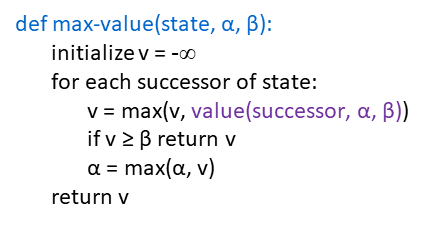 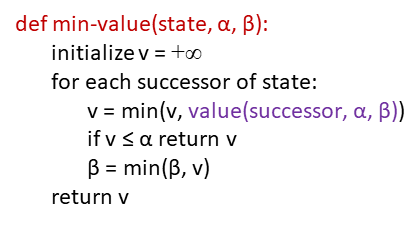 Assume your are In D and you have traversed its both children, Alpha at D becomes 20. We then return back to B, Beta becomes 20 (note that Alpha is -Inf in D). We go to E then L and then back to E. 30 is greater than Beta, so the rest is pruned. Not that Alpha remains -Inf in E, though its value here isn't important. we go back to B the value of Beta remains on changed 20. If we go to F and return back to B Beta remains unchanged and is still 20 (Note that Alpha is still -Inf). We return to A, Alpha becomes 20, And Beta remains +Inf.
So, Considering the code, the max node does not get the Alpha value from its children, rather it decides on its own by setting Alpha = max(Alpha, and returned value of its child) after visiting each child. the same is true for Beta.

Not the answer you're looking for? Browse other questions tagged minimax alpha-beta-pruning .