Is it really possible to create the “Perfect Cylinder” used in Universal Approximation Theorem for 1-hidden layer Neural Network?

There are proofs for the universal approximation theorem with just 1 hidden layer.

In this video, minute 42, the lecturer says

Here are the slides. 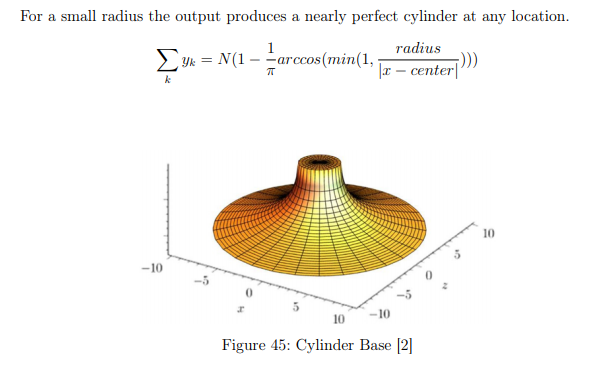 Here is a pdf version from another university, so you do not have to watch the video.

Why am I not convinced?

I created a program to plot this, and even if I decrease the radius by orders of magnitude it still has the same shape.

Let's start with a simple tower of radius 0.1: 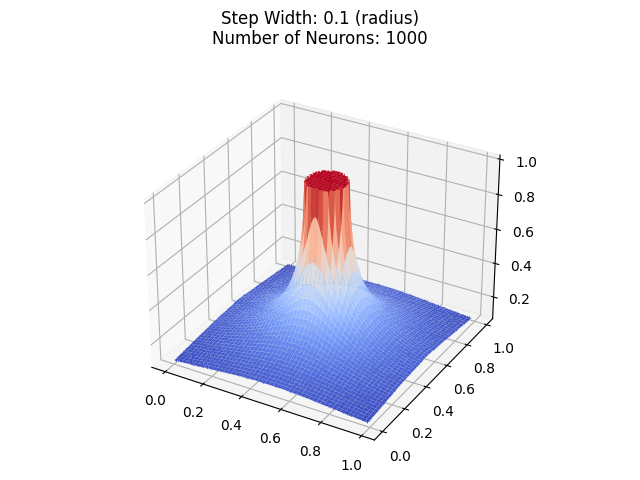 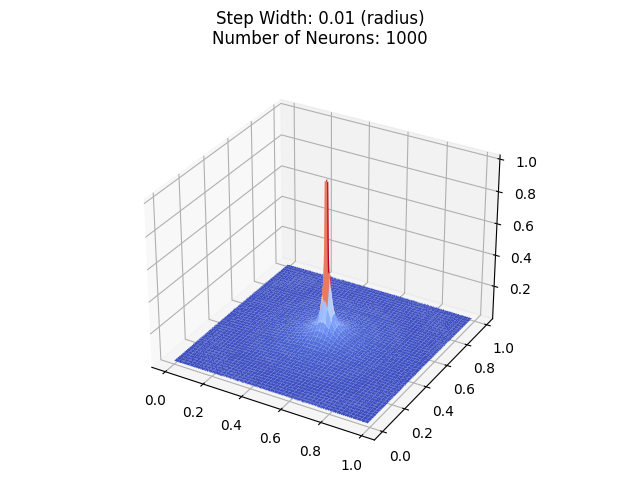 Now, you might think that it gets close to a cylinder, but it just looks like it is approximating a perfect cylinder, because of the zoomed out effect. 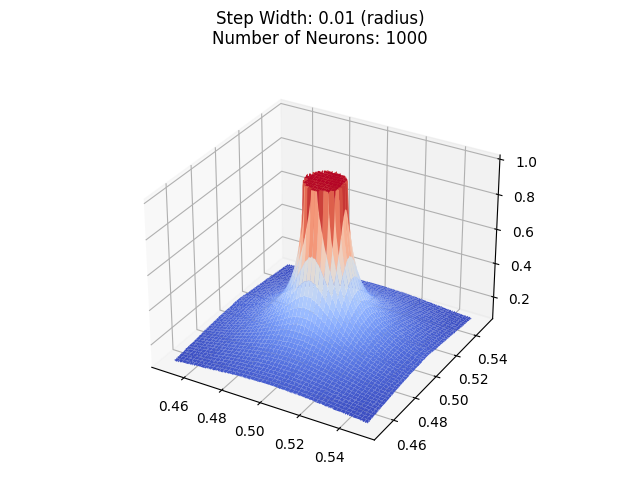 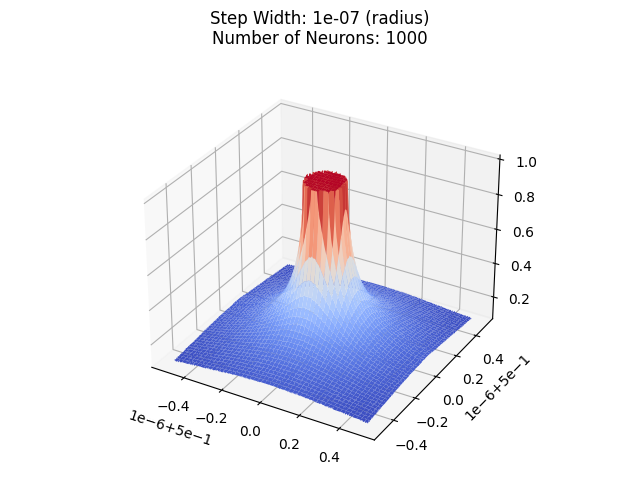 Still not a perfect cylinder. In fact, the "quality" of the cylinder is the same.

So my questions are:

Q1 Is it true that we can get a perfect cylinder solely by decreasing the radius of the tower to 0 ?

Both towers have the same shape

Clarification: What do I mean with: same shape ? Let's say we calculate the volume of an actual cylinder(Vc) with the same raius and height as our tower and divide it by the volume of the tower(Vt) .

What this documents/lectures claim that is the ratio of these 2 volumes depends on the radius but in my view it's just constant.

An objection i got multiple times once from Dutta and once from D.W is that just decreasing the radious and plotting it isn't mathematical rigorous.

So let's assume in the limit of r=0 it's really a perfect cylinder.

But if that is true this would imply that there is no use for it since it's impossible to have a radius of exactly zero. It would only be useful if we could get gradually closer to a perfect cylinder by decreasing the radius.

Q3 So why should we even care about this then ?

The original universal approximation theorem proof for single hidden layer neural networks was done by G. Cybenko. Then I think people tried to make some visual explations for it. I am NOT questioning the paper ! But i am questioning the visual explanation given in the linked lecutre/pdf (made by other people)

The more I think about it the more convinced I am that the visual explanation from the linked lecture is wrong. But the good news is there are still some ways to get close to the cylinder but not before the activation of the last neuron but instead afterwards. I haven't done it with simgoid. But I tried with ReLu instead for now.

We can cut the tower at the very top (thanks to ReLu and a bias). The closer to the top we cut it the more it will be like a cylinder.

We can control the height of the tower with the weights. 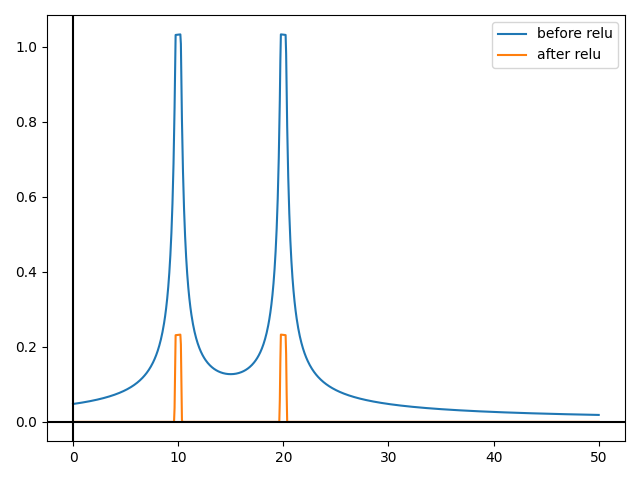 Unfortunately the closer we put this towers together the more they will start two influence each other. 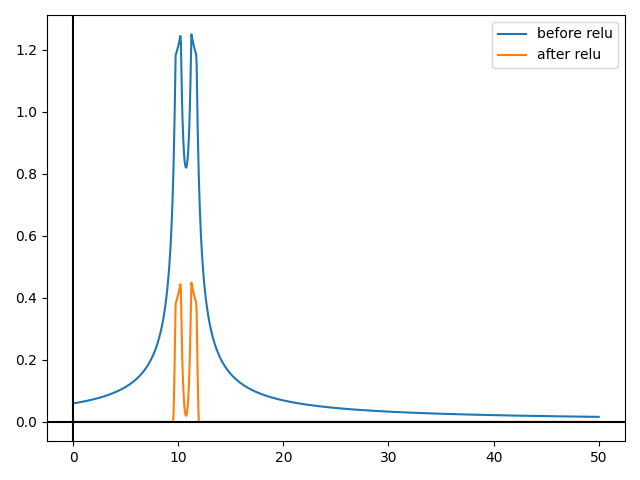 But we can counter that with a negative tower between them. 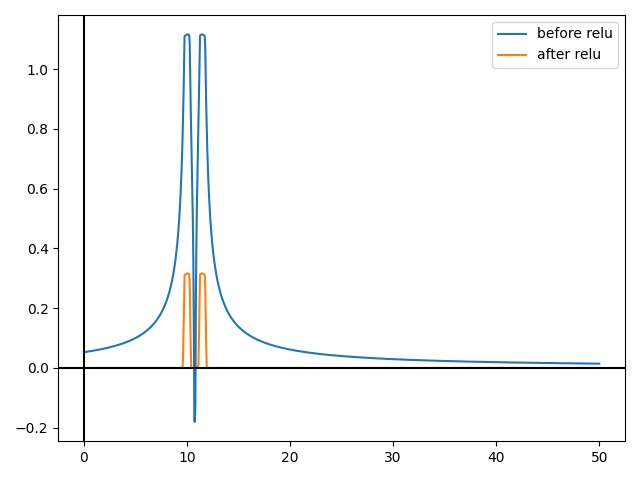 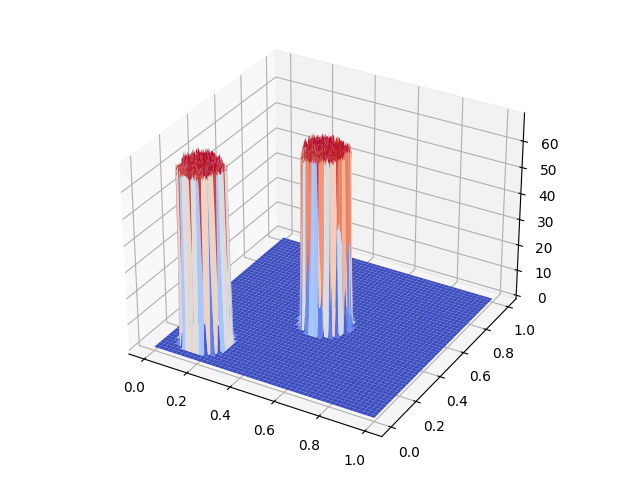 This Answer is work in progress I will update it when i find out something new.

Not the answer you're looking for? Browse other questions tagged neural-networks feedforward-neural-network universal-approximation-theorems or ask your own question.