Is it possible to design a neural network from the plot of data points?

Suppose I have been given the following diagram 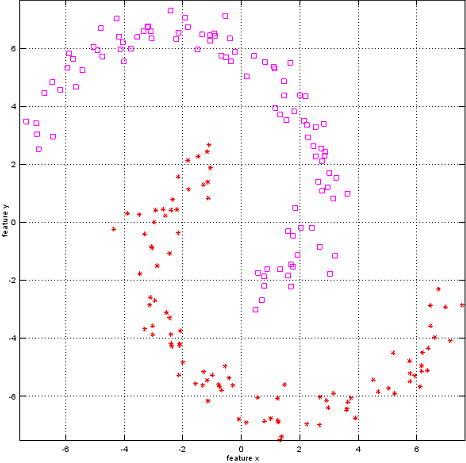 I need to design a neural network to separate the points or classes. How can I do that?

From the diagram you have given, it's quite clear that you have to design a supervised network. Also, it's clear that you are dealing with a problem that's not linearly separable i.e. you can't separate two classes using a single line. Particularly, it will require three lines to separate these two classes.

From the above observations, what you can do is:

Note: I am NOT quite sure how to obtain the coordinates from the diagram. You can either manually note all points or research for some methods to get those points automatically from the image (some image processing algorithms).

Edit: I found a good video which explains neural networks. In the video, there is non-linear data like the one in your image which is separable using multiple lines and the network is designed to try to find curves such that data can be separated and the output resembles to that when used straight lines.

3
Detect street and sidewalk surface in aerial imagery (neural network)
24
Is it possible to train a neural network incrementally?
10
Why is the merged neural network of AlphaGo Zero more efficient than two separate neural networks?
1
How to manage high numbers of input layer data points
4
Training Multi class classification (One-vs-all) on Neural network
0
Dealing with “blank” inputs in prediction of a neural network?
4
Does the neural network calculate different relations between inputs automatically?