This is a question I posted here. I am asking it on this StackExchange branch as well, so that more people who could potentially answer get to see the question.

In the A3C algorithm from the original paper: 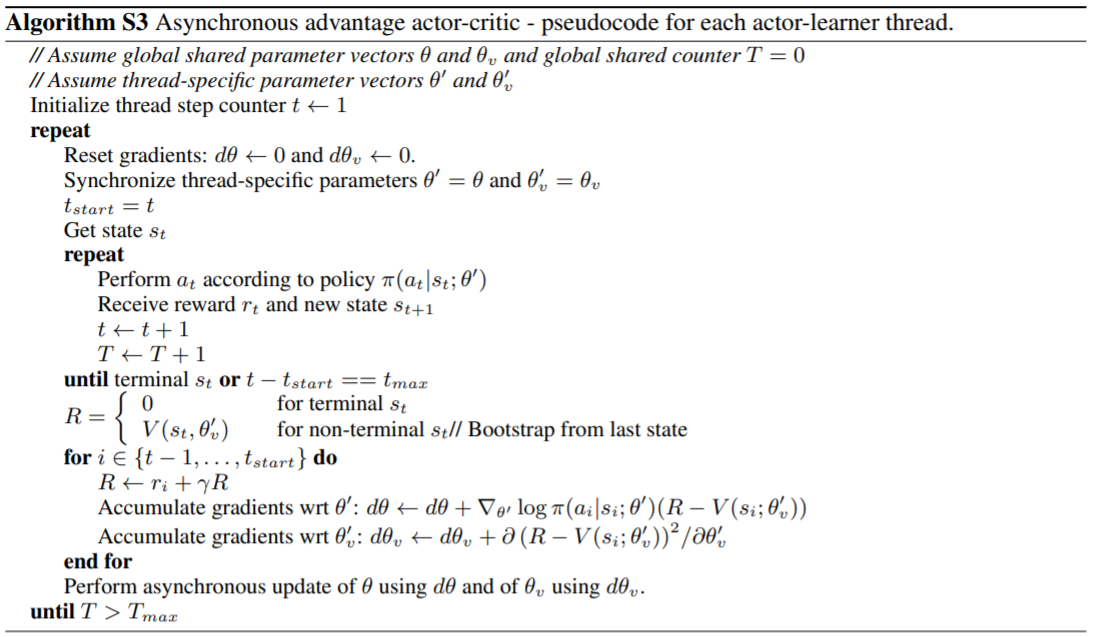 where $s_i$ is the state of the environment at time step $i$, and $a_i$ is the action produced by the policy. If I understand correctly, the output of the policy is a softmax function, so that if there are $n$ different actions, then we get the $n$-dimensional vector output

where the $o_j(s)$ are softmax layer activations obtained from forward propagation of state $s_i$ through the neural network.

Do I understand correctly that in the A3C algorithm above the term $\log \pi(a_i|s_i;\theta')$ refers to

with index $j$ referring to the position of the largest element in vector $\pi(s_i;\theta')$ above? Or maybe all action options should be contributing according to their probabilistic weights, like so

Or perhaps neither of these expressions is correct? In that case, what is the correct explicit formula for the expression $\log \pi(a_i|s_i;\theta')$ in terms of softmax layer activations $o_j$?

Browse other questions tagged reinforcement-learning policy-gradients softmax a3c or ask your own question.

2
What is the gradient of the objective function in the Soft Actor-Critic paper?
4
Eligibility vector for softmax policy with policy gradients
2
Is the negative of the policy loss function in a simple policy gradient algorithm an estimator of expected returns?
2
Advantage computed the wrong way?
2
How do I derive the gradient with respect to the parameters of the softmax policy?
1
Why are there two versions of softmax cross entropy? Which one to use in what situation?