Find the expected reward in an expectimax-based dice rolling game?

I have this question that I'm kinda stuck on.

It's a game scenario in which we set up an expectimax tree. In the game, you have 3 dice with sides 1-4 that you roll at the beginning. Then, depending on the roll, the player can choose one of the dice to reroll or not reroll anything. Points are assigned like so:

For additional context, this is an example expectimax tree I came up with, for the case that the player rolled a 1,2,4 and is considering rerolling or not:

For that scenario, I came up with this expectimax tree: 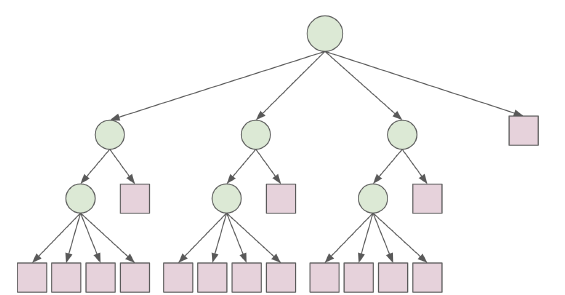 *EDIT: I asked again and the question was worded weirdly. They said we should definitely use p. What was meant by not using p is X and Y themselves can't contain p. But Y will be multiplied by p in the final simplified form.

I think something feels slightly wrong about my answer but I'm not sure what.

Thus the expected reward for if the robot helps is

1
How can an AI make tactical manoeuvres?
2
How to use DQN to handle an imperfect but complete information game?
2
Building 'evaluation' neural networks for go, reversi, checkers etc, how to train?
7
MCTS: How to choose the final action from the root
2
How can I improve the performance of my approach to solving a 1-player version of the card game "The Game" by Steffen Benndorf?
2
What is this algorithm? Is it a variant of Monte-Carlo Tree Search?