Is there a way of path reconstruction using only the history of belief states?

Given a history of belief states, is there a common method that backtracks the most likely path of ending up in the current belief state?

I have a Markov model which calculates belief states after every step. The belief state is a representation of the most likely states one could be in. A belief state may look like this:

Is there a common way to represent and estimate the most likely states one has been in?

A naive approach could be to just look for the state with the highest value per belief state and take that as the node along the reverse path. But I am not confident enough, if that is a common and a good practice, as it is not considering the fuzziness, which comes with a belief state. But then again, if I would take all states that are bigger than 0, I might not know which state leads to which state and if that transition is even possible.

This is commonly known as Bayesian smoothing. You might be familiar with Bayesian filtering, which aims to recover the belief state as defined in the first paragraph - an estimate of the current state given actions and observations up to the current time. Smoothing also uses information gained after time $t$ to estimate the state at time $t$, and hence it is only possible after those actions and observations become known. There is also prediction, where you estimate the distribution over the state in the future.

Smoothing is too broad of a topic to go into detail here, but below is a picture from the book "Bayesian Filtering and Smoothing" by Simo Särkkä that illustrates the concepts. You could start there for further information on the topic. 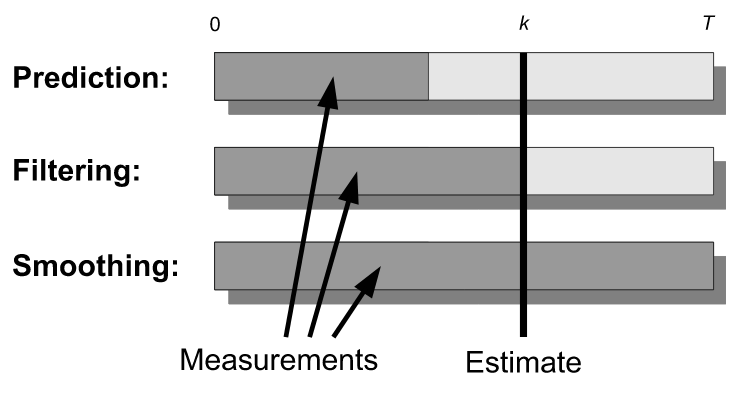 Not the answer you're looking for? Browse other questions tagged markov-decision-process pomdp .

2
Is my understanding of the differences between MDP, Semi MDP and POMDP correct?
2
Can the normalization factor for the belief state update be zero?
4
Can someone please help me validate my MDP?
1
Is there a natural way to define the terminal state from the MDP transition probabilities $p(s',r|s,a)$?
8
What is ergodicity in a Markov Decision Process (MDP)?