Computation of the counterfactual regret in CFR algorithm

I'm currently trying to understand the counterfactual regret minimization algorithm as presented in this document: http://modelai.gettysburg.edu/2013/cfr/cfr.pdf.

I think I have a good understanding of the math and formulas used but there are still some pieces that I am struggling to understand in the whole algorithm as described in the document : 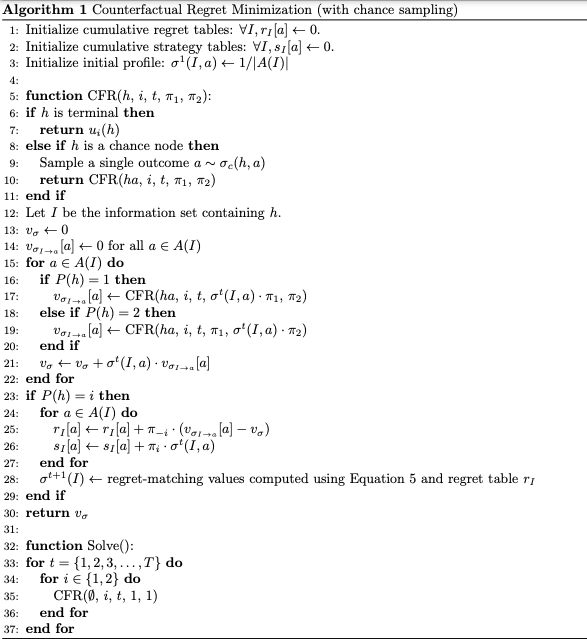 As far as I understand, the counterfactual regret is computed as :

In Algorithm 1, from line 15 to 21 we compute the counterfactual value using equation number 4 for each action available.

Side question: in the actual C++/Python implementation at line 17 and 19, we multiply the CFR by -1. I don't understand why. Thanks in advance for any explanation.

Browse other questions tagged game-ai game-theory games-of-chance or ask your own question.

2
What would be the most effective self-learning algorithm for a 7 player social deduction game?
3
How to calculate the optimal placements for settlements in Catan without an ML algorithm?
4
What is the state-space complexity of Spades?
1
How exactly is Monte Carlo counterfactual regret minimization with external sampling implemented?
1
Find the expected reward in an expectimax-based dice rolling game?