How to explain that a same DNN model have radically different behaviours with each new initialization and training?

When trying to plot the learning curve using:

I get these curves: 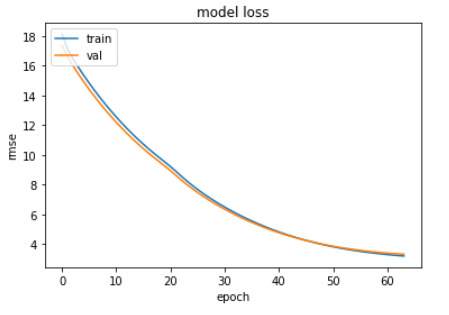 There's already an "unusual" element to point here; I've noticed that throughout the training the loss decreases but sometimes in an oscillating manner but we don't notice that on the training learning curve. For example the last four values of the loss are: $2.5176$, $3.4718$, $3.0704$ and it settles down on $3.8177$. I've also noticed that the losses provided by history.history are different than those shown during training, I suspect ones are computed before the epoch and ones after but I'm not sure.

I've also tried to train on the whole training set without a validation set to see what'll happen. I've made sure to rerun the cells of the model so that it doesn't take the weights it already found. I've noticed the same behaviour for the loss during training, but this time there is no constant predicted value that comes up as a maximum limit for the predictions.

I've already asked this question here and a user suggested to me that I should ask this question separately while providing the whole code. I ran the same code I was running and that was giving me the same predictions for no matter for my input vectors.

I think, as the user @Kostya that answered my previous question pointed out, what's happening here is called "dying ReLus". It's the same code that I'm running over and over but gives different predictions and the only random parameters are the weights and the biases. I'm sure the biases are initially initialized to zero but I don't know how the weights are handled. I suppose they're randomly generated by a centered and reduced normal distribution.

I'm sure the biases are initially initialized to zero but I don't know how the weights are handled.

... "unusual" element to point here; I've noticed that throughout the training the loss decreases but sometimes in an oscillating manner.

There's nothing unusual about the oscillations. Quite on the contrary - your curves are suspiciously too smooth.

I've also noticed that the losses provided by history.history are different

Yes, so this is a little gotcha in the keras implementation. For training loss, keras does a running average over the batches throughout an epoch, while for the validation loss it computes it after the epoch finishes. (link)

That also explains why your validation loss starts slightly lower than the training one - it actually lags behind the training loss by $\sim1/2$ of an epoch.

The fact that both losses stay almost equal suggests that your model don't really rely on training data for prediction - it got saturated ("dying ReLus") almost instantly.

Couple of suggestions that I can make:

Yes, the less neurons you have the higher the chance that all of the neurons will die out. You can get some intuition about it on https://playground.tensorflow.org/ - following the link, I've got a relu network that trains reasonably well. Try increasing the learning rate and observe saturation in the neurons. Reduce the number of neurons and see how the whole net gets stuck.

Not the answer you're looking for? Browse other questions tagged regression relu weights-initialization dense-layers learning-curve or ask your own question.

0
Why my Fully Connected Neural Network outputs the same prediction?

8
Are ReLUs incapable of solving certain problems?
12
How exactly can ReLUs approximate non-linear and curved functions?
0
How should the values of the filters of a CNN change?
1
LSTM text classifier shows unexpected cyclical pattern in loss
2
What's the purpose of layers without biases?
1
Bounding Box Regression - An Adventure in Failure
0
Why my Fully Connected Neural Network outputs the same prediction?