Is artificial life really life or not?

I define Artificial Life as a "simulation" or "copy" of life. However, should it be considered a simulation or copy?

If one had motivation and money, someone could theoretically create evolving computers, with a program that allows mutation OR simply a "simulated" environment with "simulated" organisms.

The computer (or "simulated" organism) would have the ability to reproduce, grow, and take in energy. What if the life evolved to have intelligence? Currently, there are some relatively limited programs that simulate life, but most of them are heavily simplistic. Are they life?

When should something be called life?

If you read Steven Levy's book, Artificial Life,you will find, as I did, 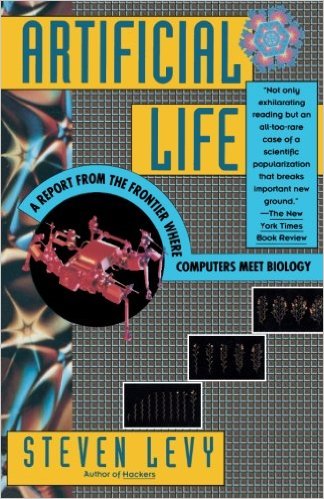 the distinction between biological and "artificial" life blurred. If you think about it, what exactly is "life", anyway? A set of complex systems with emergent behavior capable of evolution and adaptation.

A prototypical biologist may not define life that way. Indeed, he would, not being focused or concerned with the computational aspect, define it in a way that would narrow it down to biological life.

Marvin Minsky mention the concept of luggage words, and I myself came up with the notion of mirage concepts. For the former, that which we don't understand gets lump into the word. For the latter, when you take a "mysterious" concept apart, it vanishes like a mirage does as you get closer.

As you see, all becomes very murky, and I do this on purpose to illustrate just how arbitrary the very concept of "life" is.

So I think my definition is a good one, broad enough to encompass both in-silico and the organic versions. It bespeaks to algorithms, robots, viruses -- yes both computer and organic... anything that has complexity and the ability to adapt and evolve.

"Life" is a definition humans use to classify objects according to the types of behavior humans perceive as unique to living creatures.

Scientists and philosophers tend to define something as "alive" if it manifests some specific properties found in living organisms, such as self-replication, adaptation to the environment, homeostasis and capability to exploit matter and energy for its own existence and functioning. With that being said, there is no one accepted definition of life, and it is doubtful that such a definition is possible.

As to artificial life (ALife), the book "Biological Computation" (2011) by E. Lamm and R. Unger states that

it is common among researchers to distinguish between two types of approaches to artificial life:

While this is not solving the problem of definition of life, it might give more context on the subject in relation to artificial life.

Wikipedia describes life as a characteristic of "physical entities having biological processes". The same source also describes a simulation as "the imitation of the operation of a real-world process or system over time." If a digital neural net was to listen to me prattle on for long enough it could learn to speak as if it were me. It would have my knowledge and limitations but its headaches would be quite different from mine. It would never have a toothache. But you could put it in a Searle Chinese Room, and you could speak to it and it would sound exactly as if it were me long after I am dead. It has my "character" which is what my friends would recognize about me.

According to the definition of life it is not alive because it does not have biological processes. It is a simulation because it emulates what I would have said. It cannot be a copy because a digital box is not biologic.

Now let's give this simulation a biological nose so that it can smell. And maybe two eyes and ears. We continue this process until most of the simulation is equipped with biological parts which function together. Whatever it is is now able to come out of the Chinese Room and talk to you. By golly, it looks and sounds exactly like me, but I died a long time ago. Have I been brought back?

My suggestion is that a perfect copy of me would not be possible simply through training due to the level of detail required, but that the close copy would be alive. A critical point would be that there would have to be a fatal link somewhere which would cause "death". You could always create a new close copy, but not an exact copy.

I like to take an "animist" approach. (It has been suggested to me that part of the reason Japanese designs are so effective is because of the cultural affinity for the concept per the Shinto tradition. For instance, the thing where people put little eyes on everything;)

I like to think of how my dog, who is terrified of the vacuum cleaner, would regard one of the recent Boston Dynamics creations. My guess is the dog would't find much use in the distinction that the robot is an artifact as opposed to a biological entity.

I tend to take a deterministic, mechanical approach to reality. Sure things get fuzzy down at the quantum level, but even that may simply be a factor of inadequate measurement capability and the sheer complexity of quantum mechanics, which seems fundamentally beyond the grasp of even the greatest minds, when they're being honest about it.

I don't see much of a distinction between simple organisms and cellular automata, except that the former is part of a biological food chain. There is a valid hypothesis that if you had a big enough computer, Conway's Game of Life could independently develop "intelligence".

Self-replication would certainly seem to be a requirement of biological life that can be extended to artificial life. Possibly the true distinction of "artificial" is merely that it is creation of a functional system by an extra-species source, whether the creation be "biological" or "mechanical" in nature. (i.e. we can hack genes now, not just computer code.)

Imho, it is life.

Example: consider the possibility that we synthesized from completethe DNA of a human being, with zero atoms from another human, and grew said human in a lab. Most (and myself) would agree that creature is alive.

Although there are many opinions that differ, my own is that there is no absolute line to draw between something that is alive, and something that is not alive. A human is alive. But is a single bacterial cell, or a single cell from your own body? They reproduce, they eat, etc. so yes they are alive. They are not like a dog or a cat however. In fact, a bacterial colony in a pool of water, giving off a yellow or brown color can be mistaken as a mineral or mud. It is only when you look closer that you see it is actually life. What about a biological virus? It is not made of cells. It does not have DNA. Most would agree it has life. But is does not really seem to be as alive as say, a shark or giraffe. Many people do not think a car is alive. Yet cars evolve. They move, they "eat."

Life is simply a way we define things around us. A much more useful and definitive way to categorize life I think, would be to utilize a continuum instead of an all or nothing approach. Rocks would go on the end of "nonliving." Intelligent, multicellular; self-aware entities could perhaps be on the other end as "fully alive."

Other entities can go in between. As for something such as AI, I would propose adding a z-axis, to make a 3 dimensional continuum, allowing for a self aware, intelligence entity not made of cells to fit comfortably with humans without causing an all-or-nothing.

PS: thought I came to this conclusion myself, I have a suspicion someone smarter than me has already written about such an idea. If anyone feels like educating me, I'd love to hear it.

It wouldn't be considered alive if it doesn't have vital functions, such as nutrition, relation with the environment, and reproduction. While the first is easy (use a battery) and the second is the one we are developing right now (basically, the intelligence part of an AI) giving programming skills to an AI, aka the ability to reproduce, isn't widely considered a good idea, as many science fiction writers can tell you.

Not the answer you're looking for? Browse other questions tagged philosophy genetic-algorithms biology artificial-life .