I'm attempting exercise 13.1 in the Sutton and Barto textbook. It asks for an optimal probability for selecting action right in the short corridor scenario (see first 6 lines of the image below for the scenario).

Exercise 13.1: Use your knowledge of the gridworld and its dynamics to determine an exact symbolic expression for the optimal probability of selecting the right action in Example 13.1.

However, how do you find the optimal policy generally (irrespective of starting state)? I found solutions here, which magically arrives at $\frac{p^2-2p+2}{p(1-p)}$. Can someone explain this part? 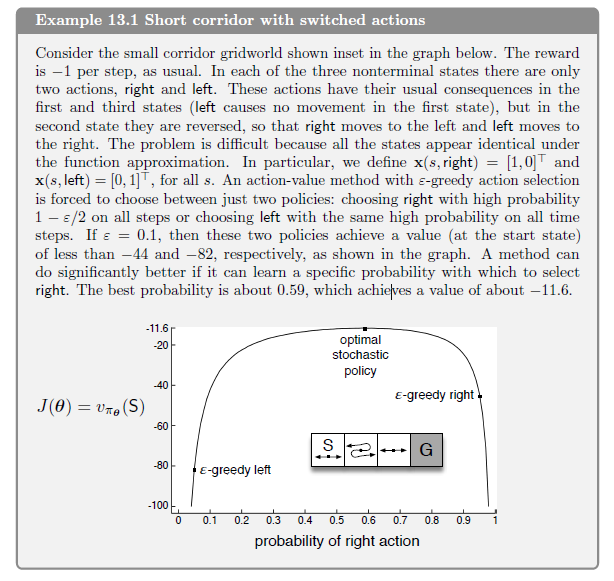 There are problems with both the approach and the expressions that you have. I don't want to just give the correct solution, though, that's an exercise for you to go through and learn from your own experience trying to accomplish it. Instead, let me illustrate that your expressions for $v(s_i)$ are wrong. To do that we'll just do a Monte-Carlo estimate for a range of values of $p$ and compare to your expression.

Here's the Python code that runs a single payout starting from state state and following the policy with probability p of choosing "right". It returns the collected reward:

Then we make a simulation code that runs the playout multiple times, collects the reward counts, and returns the average reward (so, essentially estimates $v^\pi(s_i)$):

I've plotted the resulting value estimates for each state. Together with your expression for them (blue curves). And the correct expression (red curve) that I've obtained by actually writing down and solving the equations:

As you can see, the expressions you've presented are all too far off from the results that the simulation returns. More than that - the asymptotic behavior of your solutions at $p\to0$ and $p\to1$ doesn't make much sense.

I've obtained the expressions for the red curves above by solving the system for $v(s_i)$ on my own account - without relying on weird and wrong solutions that I googled on the internet. Which I'd recommend you do as well.

Here is a simple way to solve the problem.
With probability p of moving right in normal grids, we can write down the transition matrix.

From this answer we have the method to calculate the expected steps between two states. https://math.stackexchange.com/questions/691494/expected-number-of-steps-between-states-in-a-markov-chain

Not the answer you're looking for? Browse other questions tagged reinforcement-learning .

0
Why is On-Policy MC/TD Algorithm guaranteed to converge to optimal policy?
2
Implementing SARSA for a 2-stage Markov Decision Process
3
When learning off-policy with multi-step returns, why do we use the current behaviour policy in importance sampling?
0
Converging to a wrong optimal policy if the agent is given more choices
2
Is the initialisation of $V(s)$ and $\pi(s)$ really arbitrary in policy iteration?