I am implementing some "classical" papers in Model Free RL like DQN, Double DQN, and Double DQN with Prioritized Replay.

Through the various models im running on CartPole-v1 using the same underlying NN, I am noticing all of the above 3 exhibit a sudden and severe drop in average reward (with a sudden and significant increase in loss) after achieving peak scores.

After reading online, I can see that this is a recognized problem but I cant find a suitable explanation. Things I have tried to mitigate:

This problem persists, and I cannot seem to achieve any sustained peak performance.

Edit: Taking from @devidduma's answer, I added time based LR decay to the DDQN+PRB model and kept everything else same. Here are the numbers, they look better than before in terms of the magnitude of the performance drop.

This is a case of overfitting the Q function leading to compounding errors when selecting actions.

Judging from the table you have posted, you should probably train until 400 up to 600 episodes and then stop training the neural network.

Compounding errors are a well known issue in autonomous driving. Consider the following slide from Stanford lectures on reinforcement learning: 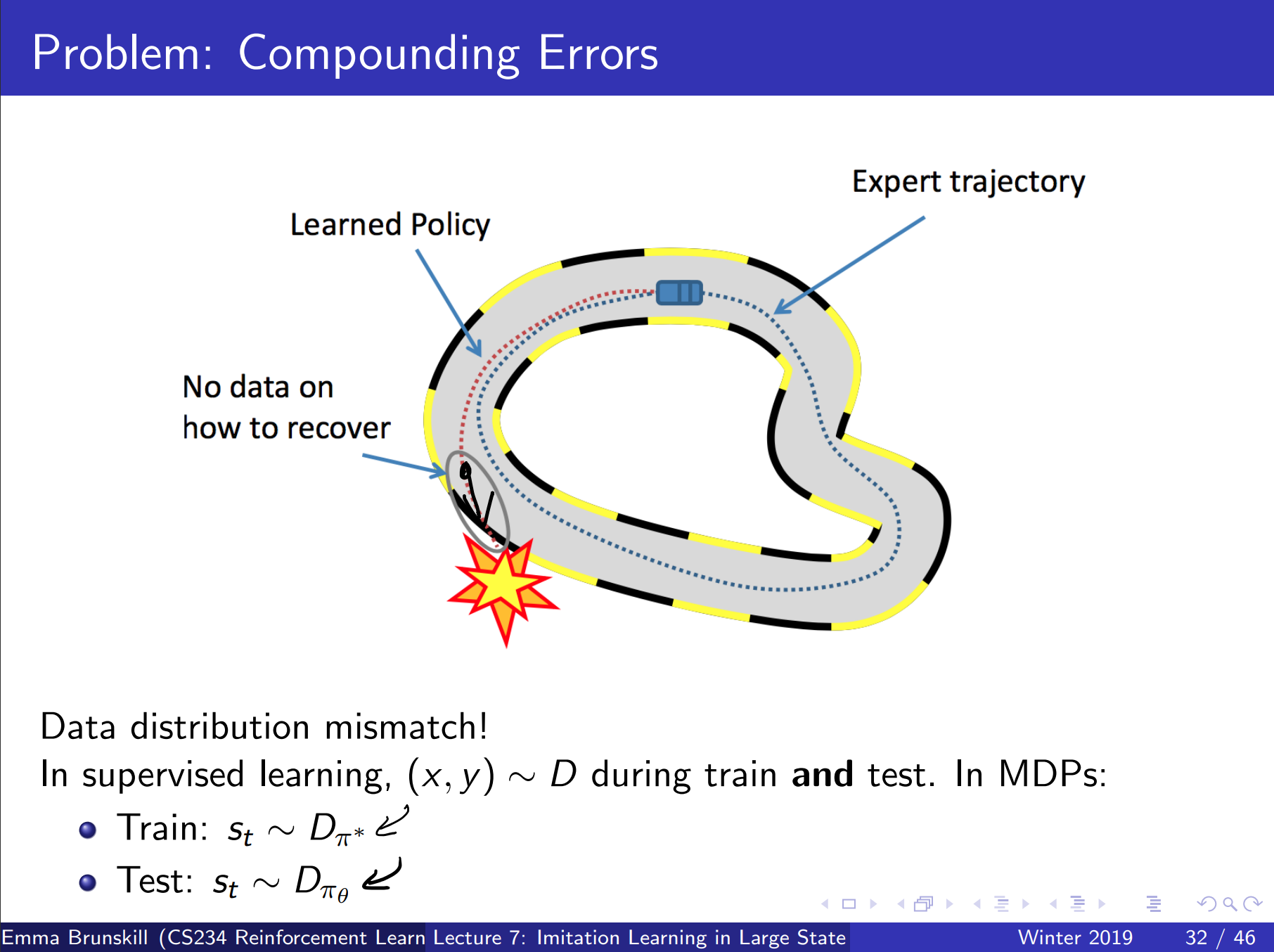 The slide is actually treating this problem in the specific case of imitation learning, but the concept of data distribution mismatch and compounding errors can be applied in your case too. Basically, whenever a wrong action is selected because of overfitted, biased Q value function, the agent does not have any more data on how to recover from that mistake, even more so when the Q function is overfitted.

Moreover, compounding errors were at first considered to increase linearly in time, but this is not true. They increase rather quadratically in time, as you can see from the following slide. 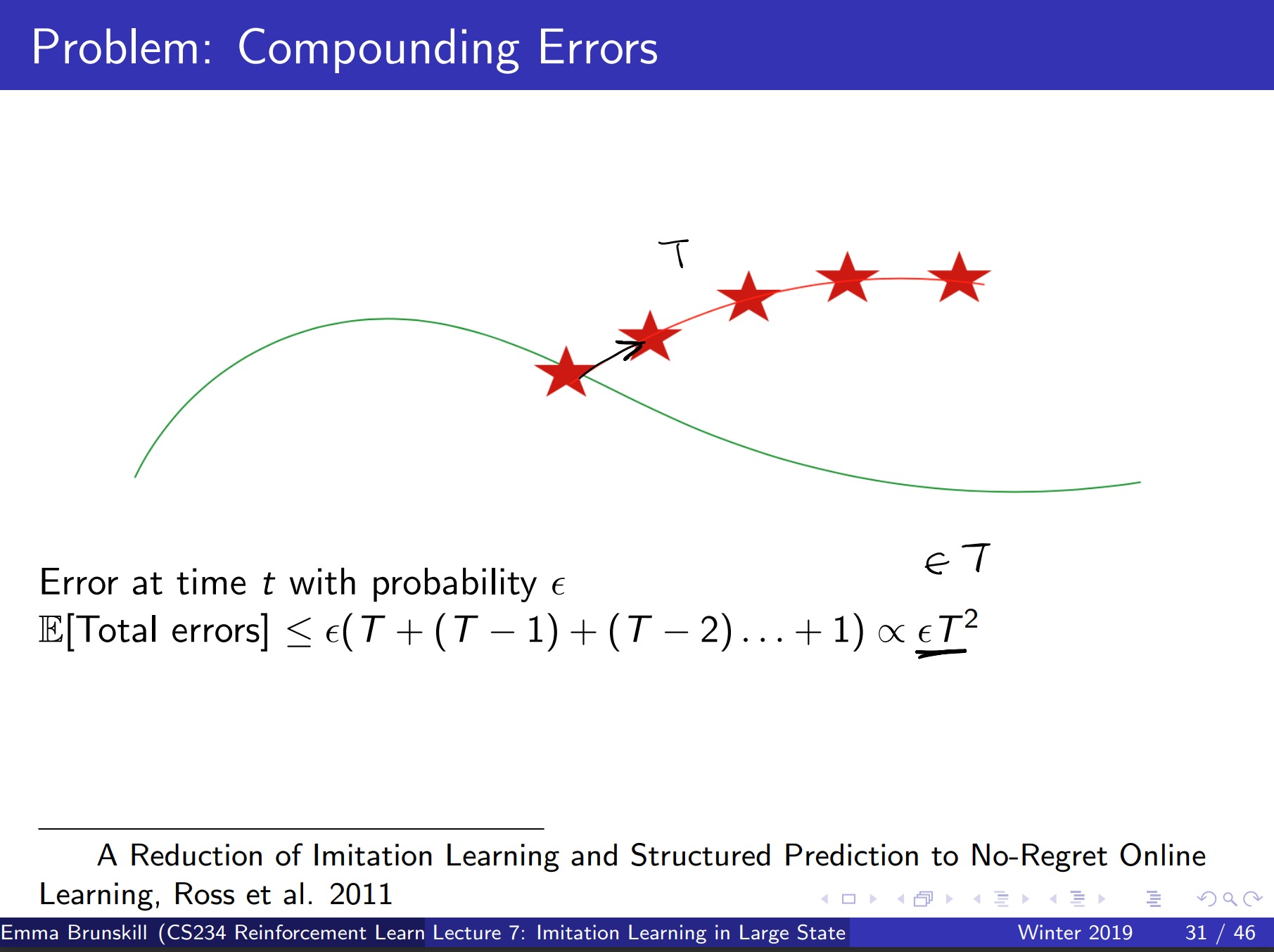 It will only get worse for your agent once the wrong action is picked. I am not sure if the following advice is going to work in order for you to continue training without stopping, but you could give it a try.

In Temporal Difference learning methods like TD-0, SARSA or Q learning, finite-state and finite-action MDP's converge to the optimal action-value if the following two conditions hold:

Each one of these does guarantee convergence to the optimal policy, of course in the limit of exploration for any Temporal Difference learning based algorithm. Without going into much details, I would suggest you use a time-based decaying learning rate with the following formula:

In Keras setting the decay should look like the following: model.compile(loss='mse', optimizer=Adam(lr=self.learning_rate, decay=decay_rate)) Provide there any value that you see fit for the decay rate. I would suggest a value of $0.001$. Try and tune this hyperparameter if it does not work with $0.001$, although that value should be a good starting point.

Give it a try and tell me if it fixes your problem.

Not the answer you're looking for? Browse other questions tagged q-learning deep-rl gym double-q-learning or ask your own question.

4
What could be causing the drastic performance drop of the DQN model on the Pong environment?

0
DQN it's not working properly
1
Why do my rewards fall using tabular Q-learning as I perform more episodes?
0
Why would the reward of A3C with LSTM suddenly drop off after many episodes?
2
Why do I get the best policy before Q values converge using DQN?
0
Is is not possible to achieve average reward of more than 20-40 with simple Q-Learning