Where does the so-called 'loss' / 'loss function' fit into the idea of a perceptron / artificial neuron (as presented in the figure)?

I am currently studying the textbook Neural Networks and Deep Learning by Charu C. Aggarwal. Chapter 1.2.1.3 Choice of Activation and Loss Functions presents the following figure:

$\overline{X}$ is the features, $\overline{W}$ is the weights, and $\phi$ is the activation function.

So this is a perceptron (which is a form of artificial neuron).

But where does the so-called 'loss' / 'loss function' fit into this? This is something that I've been unable to reconcile.

The way the loss function was introduced in the textbook seemed to imply that it was part of the architecture of the perceptron / artificial neuron, but, according to hanugm's answer, it is external and instead used to update the weights of the neuron. So it seems that I misunderstood what was written in the textbook.

In my question above, I pretty much assumed that the loss function was part of the architecture of the perceptron / artificial neuron, and then asked how it fit into the architecture, since I couldn't see any indication of it in the figure.

Loss function is a function used to measure the loss. It is not used in any component of a neuron. It is used in updating the weights of the neuron i.e., in order to train the neuron.

The contribution of a loss function is in the updation of $\bar{W}$.

For a given $\bar{X}$ and $\bar{W}$, the neuron gives a post-action value $h$. But the desired output may not be exactly $h$. The distance measure between the desired value (say $h^\prime$) and post-activation value $h$ is called the loss of the perceptron for $\bar{X}$.

We want to decrease the loss of the perception i.e., $\left\vert h - h^\prime \right\vert$. The only task we can do is changing $\bar{W}$, the parameters of the perceptron model given in the question. In order to update the weights, we have to calculate the derivative of loss function wrt the weights of the model and then update weights using some updation rule.

Thus, loss function will come into play during the training phase of the neuron.

To be concise: currently you are dealing with the neuron and its components. Loss functions for training the neuron will come later.

The loss function is simply a way to measure how wrong a neural network is, it doesn't affect the output of the neuron.

Imagine that the image that was shown to the network is a human, we can say that the target values are [0, 0, 1] because we want it to output that the image is a human with 100% confidence. Now we must measure how wrong the prediction actually was using a loss function. There are many loss functions, but for simplicity I'll use the squared error. In this case the loss will be equal to (1-0.8)^2=0.04 (expected value - output)^2.

To train the network we use this instead of accuracy for the following reason. With both these outputs [0, 0.1, 0.9], [0.2, 0.3, 0.5] the network predicts 'human', the largest value, but in the first case it is 90% sure whereas in the second it is only 50% sure. We can say that the first network is better, but if we only used accuracy, as both predict the same, they would appear to be just as good.

This can be vectorized: 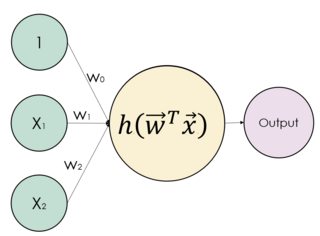 In the simplest case $h$ can be defined as follows:

or it can also be defined as $h=\text{sign}(\overline{w}\cdot\overline{x})$, which means that samples above the line belong to class 1. 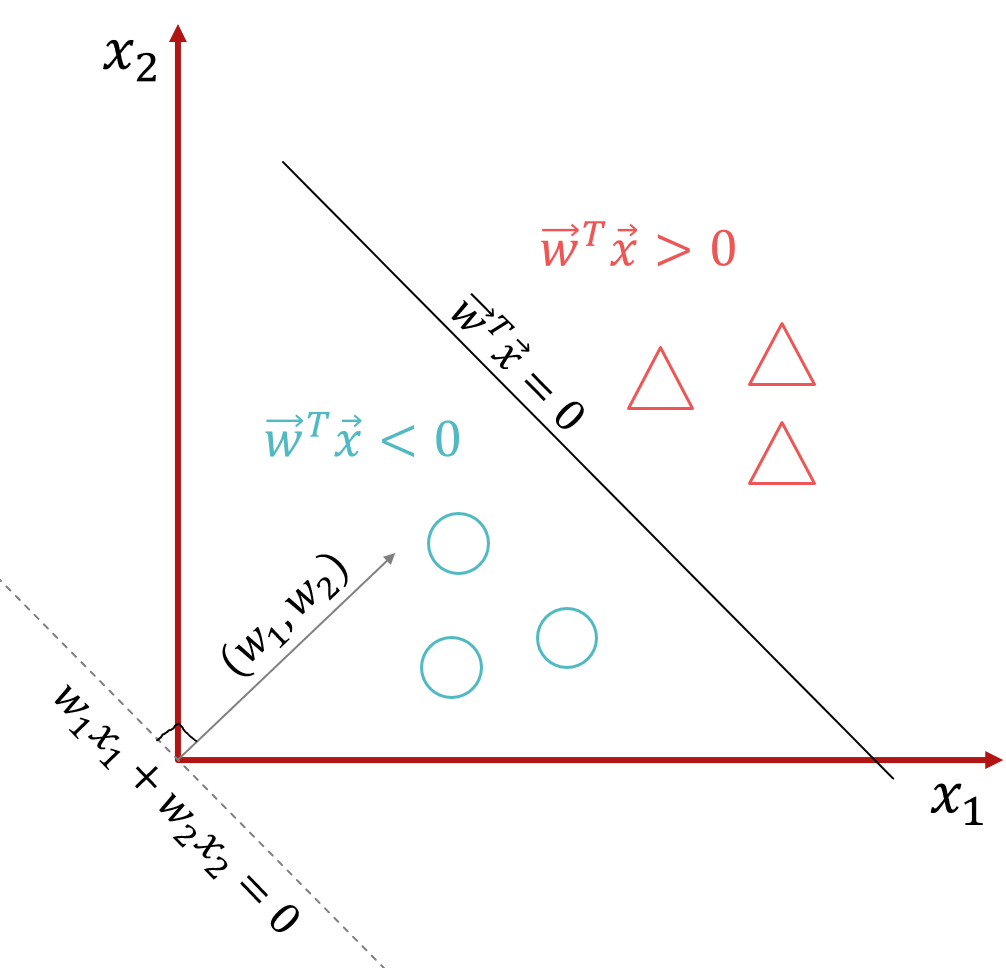 Since our $h$ is not continuous and not differentiable, we cannot apply gradient descent optimization. Instead, the weights can be optimized iteratively:

for the details, you can refer to Wikipedia

So answering your question, for this particular case, there is no loss function. Optimization of a loss function usually involves SGD which requires the function to be continuous and differentiable. For instance, if $h$ is defined as a sigmoid function, you can use binary cross-entropy as a loss function.

There are also other optimization approaches, such as genetic algorithm, expectation-maximization and hill-climbing that do not require a loss function.

Not the answer you're looking for? Browse other questions tagged objective-functions activation-functions artificial-neuron perceptron loss or ask your own question.

2
Is $(y_i - \hat y_i)x_i$, part of the formula for updating weights for perceptron, the gradient of some kind of loss function?
0
An explanation involving the sign activation, its affect on the loss function, and the perceptron and perceptron criterion: what is this saying?
1
Is the formula $\frac {1}{s}\sum _{j=1}^{s}|d_{j}-y_{j}(t)|$ the correct form of 0-1 loss function, in the context of Perceptron?
0
Incorporating regularization for the kernel perceptron

1
Can most of the basic machine learning models be easily represented as simple neural network architectures?
2
Why doesn't the set $\{ -2, +2 \}$ in $E(X) = (y − \text{sign}\{\overline{W} \cdot \overline{X} \}) \in \{ −2, +2 \}$ include $0$?
5
How should we interpret this figure that relates the perceptron criterion and the hinge loss?
0
Loss randomly changing, incorrect output (even for low loss) when trying to overfit on a single set of input and output
0
Why is loss displayed as a parabola in mean squared error with gradient descent?
2
How do sigmoid functions make it so that the prediction $\hat{y}$ indicates the probability that the observed value, $y$, is $1$?
0
An explanation involving the sign activation, its affect on the loss function, and the perceptron and perceptron criterion: what is this saying?