Questions about a research paper on salient region detection and segmentation

I am reading this paper in an attempt to recreate the salient region detection and segmentation model employed. I have the following questions pertaining to section 3 of the paper and I would highly appreciate it if someone could provide clarity on them.

However, there is no mention of

in the equation. Hence, I am confused as to what pixel the saliency value is being computed for. Is it

Note 1: This question was originally posted on Stack Overflow. I was advised to post it on another platform as a consequence of it being unfitting to the site. Hence, I am uploading the question here. Link to the original post here.

Note 2: In case you are unable to access the link to the research paper, the following citation may help: Achanta, R., Estrada, F., Wils, P., & Süsstrunk, S. (2008, May). Salient region detection and segmentation.

Very interesting paper, I did not know you could get such results using traditional image processing.

Since only average feature vector values of $R_1$ and $R_2$ need to be found, we use the integral image approach as used in [14] for computational efficiency. A change in scale is affected by scaling the region $R_2$ instead of scaling the image. Scaling the filter instead of the image allows the generation of saliency maps of the same size and resolution as the input image

So basically you run the same algorithm for different values of $w_{R_2}$ that will give you different saliency maps of different scales ($R_2$ scales).

At a given scale, the contrast based saliency value $c_{i,j}$ for a pixel at position $(i, j)$ in the image is determined as the distance D between the average vectors of pixel features of the inner region $R_1$ and that of the outer region $R_2$

So the coordinates $(i, j)$ are referenced to the whole image, it is almost a convention, everybody uses those indexes to refer the whole image, I do not know why, maybe it was inherited from matrix notation.

So for each pixel in the image you overlap on top $R_1$ and then $R_2$ on top of $R_1$, then you compute the distance $D$ for those 2 regions to get the saliency value of that pixel, then slide the $R_1$ and $R_2$ regions in a sliding window manner (which is basically telling you to implement it with convolution operation)

"Bin" is just one of the groups you divide an histogram into. The authors say to compute one histogram (it is used to approximate probability density functions) and then select the value of the biggest bin (the range of values with more occurrences. 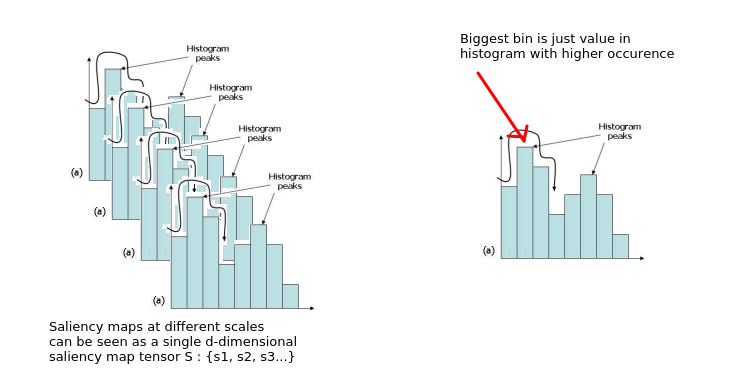 Not the answer you're looking for? Browse other questions tagged computer-vision math hill-climbing or ask your own question.

0
In this paper, if region $R_{2}$ moves in a sliding window manner, won't the saliency map have a smaller size than the original image?

7
What algorithms are used for image segmentation of images where objects are not composed of pixels that are similar in value?
2
Understanding a paragraph about object detection with two objects
1
Is there a full and precise formulation of Theorem 1 in the Integrated Gradients paper?