Does the output layer in a deep neural network need an activation function?

I have enrolled in a course that uses only one hidden layer, and that is the only layer that has activation functions. The model can be visualized as follows: 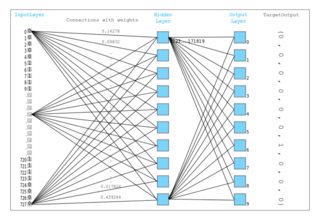 and here is a PyTorch implementation:

A neural network layer with no activation function is the same as "linear activation" i.e. $f(x) = x$

This is often used for the output layer in regression problems, where a constrained output like that of sigmoid, hyperbolic tangent or ReLU may not be appropriate.

For an output layer, this is fine, and does not conflict with any theory behind neural networks. It will often be combined with a mean squared error (MSE) loss function that makes the gradient calculation simple at the output layer.

In the case of a classifier, some libraries (notably including PyTorch which you are using) require you to have two variants of your neural network - a trainable version without a final sigmoid or softmax layer, and the "full" version which adds sigmoid or softmax on top (usually just a function that calls the training network and add this last activation). This is done to allow you to use more stable gradient calculations that are based on the logits, the values before applying an activation function.

I'd like to add more information to Neal's answer.

A network implemented in the example does not include activation for the output, because it will be applied during the training:

The problem considered in the example is multiclass classification, which is usually solved with softmax activation and cross-entropy loss. F.cross_entropy combines log_softmax and nll_loss in a single function, which is numerically more stable as softmax and NLL loss. See this discussion for more details, and here is an article about different implementations.

Not the answer you're looking for? Browse other questions tagged neural-networks deep-learning activation-function or ask your own question.

4
Does leaky relu help learning if the final output needs negative values?
15
Why would you implement the position-wise feed-forward network of the transformer with convolution layers?
6
Can a deep neural network be trained to classify an integer N1 as being divisible by another integer N2?
1
Stochastic gradient descent does not behave as expected, even with different activation functions
2
Why is no activation function needed for the output layer of a neural network for regression?