Graph neural network - what level (node or link or graph) prediction should be used for my problem?

I posted this on cross-validated but did not get a response. Trying my luck here. Sorry if this is not recommended.

I have an undirected graph with nodes separated within a specified distance, say d, being connected. The only feature of the nodes is an integer (0 or 1). The feature of an edge is the distance (as a vector, with 3 cartesian coordinates) between the nodes. My aim is to predict some new vector associated with ONLY the central node (all the nodes in the graph are with in a cutoff, say 5d, from the central node). Generally, this vector depends on the features of the nodes and edges in some unknown, nonlinear fashion. 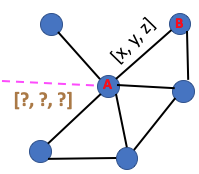 This does not look like a graph-level prediction in GNN since the required vector is closely connected to a particular node in the graph structure. Can the problem be formulated in terms of node- or link-prediction? Please suggest if there is a way to study this problem using graph NN. Thanks in advance!

PS: Technically this is a physics problem, and I am interested in where the central atom will jump given the positions of all its neighbor atoms within a reasonable cutoff distance. The required vector depends on the type of atom (which is a feature of nodes) and its surroundings' atom type and position. I have a lot of data of central atoms with surrounding atoms (within cutoff distance) and the observed jumping vectors of central atoms, and want to build a ML model which predicts those jumping vectors given a central atoms and its surroundings. (this paragraph taken from the discussion of the same question I have posted elsewhere earlier).

5
What is a graph neural network?
6
Is this idea to calculate the required number of hidden neurons for a single hidden layer neural network correct?
3
How can I learn a graph given nodes with features in a supervised fashion?
1
How to improve neural network training against a large data set of points with varying magnitude