Is my understanding of confidence (precision) correct?

I'm attempting to develop a genetic algorithm capable of discovering classification rules for a given data set, a number of papers make use of the confidence (precision) and coverage of a rule to define its fitness. In particular, I've been following this paper.

However, I'm not sure my understanding of the equations is correct.

In that paper, the confidence is defined as

They describe it as follows

Is this saying the total number of occurrences of the attributes in a given rule $P$ which occur in rules which have been classified as class $D$, by the number of attributes in $P$?

Where an example of a rule containing two attributes would be as follows:

It seems a number of papers define it differently which has led to my confusion, if anyone is able to confirm my understanding or provide an some insight that'd be great.

The confidence equation you are referring to is the definition of precision in the Classification/pattern-recongition/information-retrieval contexts. You can visually understand the equation with the help of the following figure from the wikipedia page: 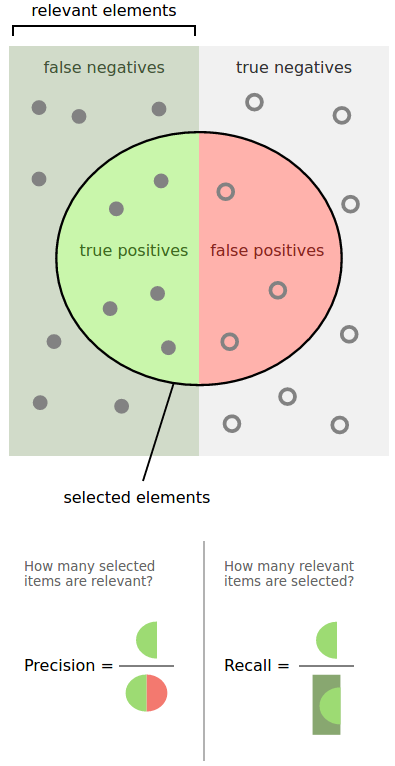 I hope with this understanding you can implement the fitness function for your Genetic Algorithm. If you want more help in defining the fitness function, then you should probably add details about your approach or links to the research paper you are trying to follow.

1
How to calculate the precision and recall given the predictions and targets in this case?
1
Given the precision and recall of this model, what can I say about it?
4
How to calculate the confidence of a classifier's output?
1
Is it possible that every class has a higher recall than precision for multi-class classification?
0
What is Precision@K for link prediction in graph embedding meaning?
1
Understanding Generalized Advantage Estimate in reinforcement learning
1
Why doesn't the high precision of neural network weights improve accuracy?